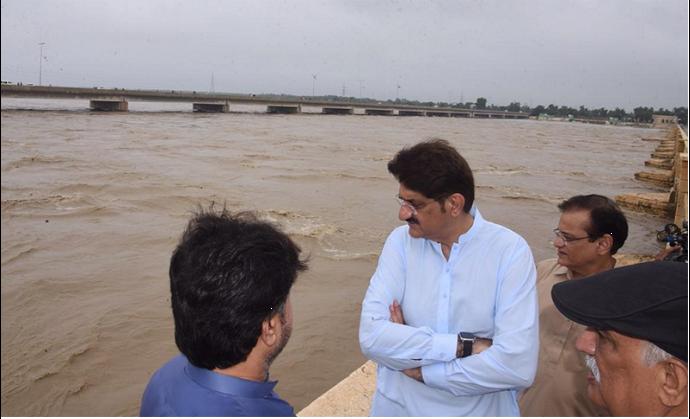 SUKKUR: Sindh Chief Minister Syed Murad Ali Shah while talking to the media during his visit to Sukkur said that this year the situation is more difficult than 2010 and 2011. He said that he has seen all the rural areas of 11 districts, where public representatives are serve and machinery is also on alert by any situation.Media talk: CM while talking to journalists said that 6,00,000 cusecs of water will come on Guddu barrage which is high flood, machinery has been provided to strengthen the dam from Sukkur to Kotri and prevent the crack While I am making the works department an inventory of the machinery of their contractors so that we can use the machinery in case of any emergency. Mr.Shah said that 500 times more rains have occurred in 4 spells. CM expressed grief over the loss due to the collapse of the roofs of houses and others since last night. Murad said that now the federal government is helping us with the efforts of Chairman Bilawal Bhutto. In response to a question, CM said that there has been as much outflow as there has been inflow at Tarbela. He told the media that a flood will pass through Indus river tonight. He added that negligence of the people will not be forgiven in any case, in such a difficult situation, if anyone is negligent, action will be taken against him. Murad shah said, we have declared all the districts Calamity-hit.  CM said that help has also started coming from the federal government. In response to another question, he said that this year, the situation is more difficult than 2010-11. He said that if our hard work is considered as a photo session then it does not matter, but we are here to help the people. He said that they are working to drain water from the cities, another spell of rain is coming from tomorrow, may God bless. He said that I have come to see all the rural areas of 11 districts, there are present public representatives۔ finally said that strict action will be taken against those who hoard relief items during this difficult time.