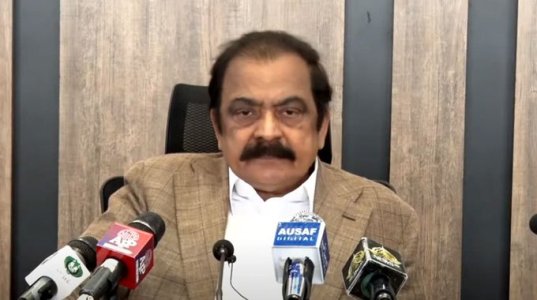 ISLAMABAD: Federal Minister for Interior Rana Sanaullah Khan on Sunday rejected allegations of torture on PTI leader Shahbaz Gill in police custody and made it clear that the coalition government did not believe on any kind of torture.

He said that PTI on the behest of Imran Niazi launched condemnable campaign over the Lasbella incident by leveling heinous allegations on the families and martyrs of the Pak Army.

He said that PTI leveled such allegations against the state which even were not leveled by enemy state Afghanistan.

On August 8, Dr Shahbaz Gill, in continuation of previous allegations, appeared on a television with a fixed plan and aired comments against the Pakistan Army on Imran Khan’s agenda. Shahbaz Gill had everything planned with the private television channel, from when they will call him, to how long the conversation will run.

According to details, on August 9, a First Information Report (FIR) was registered against Shahbaz Gill over his remarks and Islamabad police arrested him over instigating Army Officers to not obey the orders of the high command.

He said that politicians at many times had talked about the intervention of the establishment in the politics but not a single person had ever stated that army officers should not obey the orders of the high command. He said that any state or institution could never allow anyone to spread such kind of allegations.

He said that Shahbaz Gill was produced before the judicial magistrate within 24 hours of his arrest and he (Shahbaz) did not utter any word regarding torture and misbehave before the Magistrate and media.

“I can confirm as the interior minister that no torture was carried out against Gill during the police custody,” he said and added the Pakistan Muslim League-Nawaz (PML-N) as party always opposed and condemned any kind of torture as it was clear violation of the constitution.

The whole leadership of the PML-N was put behind bars during the tenure of Imran Khan. He said that Imran Khan should sought apology from the nation over his acts during his tenure.

He said that Shahbaz Gill remained in Adiyala Jail from August 12 to 17 and Shahbaz Gill never stated that he was tortured.

Terming the PTI’s narrative as drama, he said that the victim (Shahbaz Gill) had never stated that he was tortured or sexually abused.

He said that the whole nation condemned the anti-state propaganda of Imran Khan about the martyrs and due to this campaign PTI was severely damaged.
He said that PTI did not own the statement of Shahbaz Gill and diverting the issue started new drama of torture on Shahbaz Gill.

Referring to yesterday speech of Imran Khan where he attacked Islamabad’s Inspector General (IG), deputy inspector general (DIG) and Additional District and Sessions Judge Zeba Chaudhry, Rana Sana said that a case should be registered against Imran Khan for inciting the public against state officials who were only fulfilling their duties, per the law.

He clarified that police interrogated Shahbaz Gill over his remarks but there was no torture during ingestions.

The whole drama was launched to divert the attention of the nation from the controversial statements made by Gill as well as the hateful social media campaign against the Lasbela copter crash martyrs.

He said that Shahbaz Gill did not file any application before any institution, authority or court regarding torture or sexually abuse.

He said that the interior ministry had prepared a report on Imran Khan’s speech and sought an opinion from the Law Ministry, Attorney General for Pakistan and the Advocate General Islamabad whether a separate case should be registered or clubbed it with the ongoing case registered against Shahbaz Gill.

He made it clear that the government would not allow Imran Khan to divert nation’s attention with the false propaganda.

He also claimed the comments made by Gill on a private TV were pre-planned and he was speaking the words of Imran, adding that the entire story created by PTI was nothing but foreign propaganda.