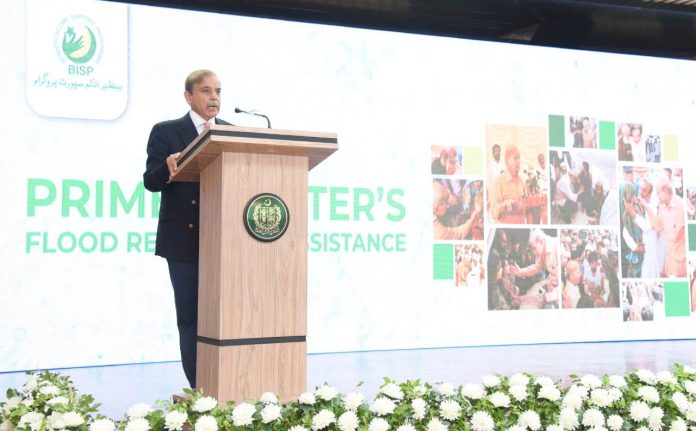 The prime minister, addressing the launching ceremony, said the cash disbursement would be done through Benazir Income Support Program in collaboration with the National Disaster Management Authority and other allied departments.

He said the heavy monsoon rains and consequent floods affected all four provinces with Balochistan being the most affected where hundreds of people died and infrastructure was destroyed.

He also paid tribute to the six martyred army officers including Quetta Corps Commander Lt. General Sarfaraz who sacrificed their lives in a chopper crash during the flood relief operation.

Mentioning his multiple visits to the flood-hit areas, the prime minister appreciated the rescue and relief efforts of all including NDMA, PDMAs, National Highway Authority, and other provincial departments.

“The whole nation needs to unite to face this situation. The federal and provincial governments are also cooperating with one another. Our international partners and donors are also extending their support,” he added.

The prime minister told the gathering that the cash assistance program, launched in Jhal Magsi area of Balochistan, would support over Rs 9 million people across the country.

As assured by the NDMA chairman, the prime minister said the cash disbursement would be completed within three days to help the people afford their food and other immediate needs.

He said in the next phase, a joint survey would be carried out to assess the damages to crops, houses, highways and bridges which would follow the coordination with provinces to carry out the rehabilitation work.