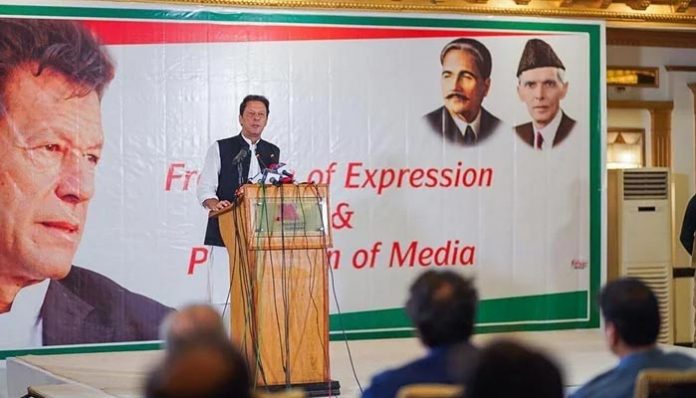 ISLAMABAD: PTI chairperson Imran Khan told the “neutrals” to review their policies as there is still time left to make changes and the decisions taken behind closed doors are not in the country’s interests.  Speaking during a seminar related to freedom of expression, the former prime minister said that the establishment imposed these “thieves” upon Pakistan.  “How did the establishment let them [the current government] rule us knowing about the foreign conspiracy? This is because they have the most power right now,” said the former premier.  “No matter how much you [the establishment] call yourself neutral, the nation will blame you for imposing this government on us,” he added.  The former premier said that it [the establishment] is forcing us to accept these thieves and for that, they are spreading fear among the nation. “They are calling our MNAs and pressuring us to accept this government,” he revealed. The PTI chairman claimed that the government “picks up” his party’s social media activists and forces them to say that they tweeted under his directions. “Whoever tweets against the army is picked up,” he added. Talking about his party aide Shahbaz Gill, Khan said that he shouldn’t have passed the remarks for which he is being tried, adding that torturing him is a big crime. “Maryam Nawaz, Ayaz Sadiq, Maulana Fazlur Rehman have talked against the army, however, nothing happened to them,” he stressed. The former premier once again repeated that transparent elections were the only way to stabilise the political situation in the country. At the outset of his speech, Khan talked about freedom of expression and called it a part of liberating society. He added that a nation can only prosper if it is liberated. The PTI chief said that he is not afraid of freedom of expression, adding that freedom does not mean insulting someone. Berating the two main parties in the coalition government, the former prime minister said that the PML-N and PPP have made corruption cases against each other. “In 1996, Nawaz Sharif and Zardari moved Rs1.5 billion out of the country,” he alleged. Khan claimed that everyone knows about the corruption done by these parties. “I supported former president Pervez Musharraf because he came to end corruption, however, he later gave an NRO to these people,” he added.