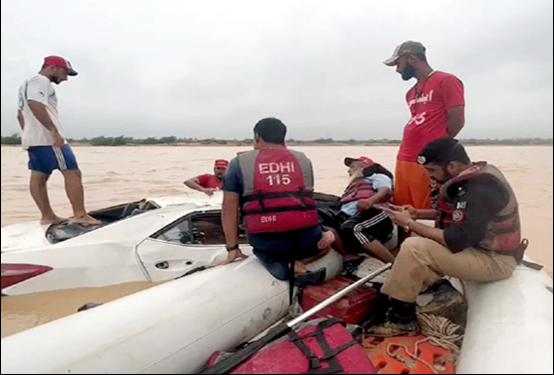 KARACHI: Six members of a family and their driver — travelling to Hyderabad from Karachi — went missing on Wednesday after their car was swept away by a flood following heavy rain in Sindh. Their vehicle was discovered later in the day on the bank of the Malir River, two to three kilometres away from Karachi’s Link Road, but rescue officials said no bodies were found. A relative of the missing family, Mohammad Danish, told that his uncle was on his way to Hyderabad after attending a marriage in the port city. Danish added that apart from a driver, his uncle, aunt, and their four children were travelling in the car. “Due to rains, they used the link road. As the flow of the water increased, the car was swept away,” he said, while also claiming that his uncle had asked the driver to not use the link road. Saad Edhi, son of Faisal Edhi, said that as the water flow was fast, the car was swept away to a considerable distance. “The car will be taken out of the Malir River with the help of heavy machinery. For now, it has been tied to a rock inside the river,” Saad said, adding that the search for the family is underway. Meanwhile, a flood from the Thaddo Nadi claimed the life of one woman when it entered Mir Khan Barfat Goth. Fortunately, her three children were rescued. The body of the woman was retrieved, area residents said. The flood water damaged many houses, they added. It is important to note that Pakistan Meteorological Department issued warnings for flashfloods and heavy rains in Sindh between August 16 and 19.