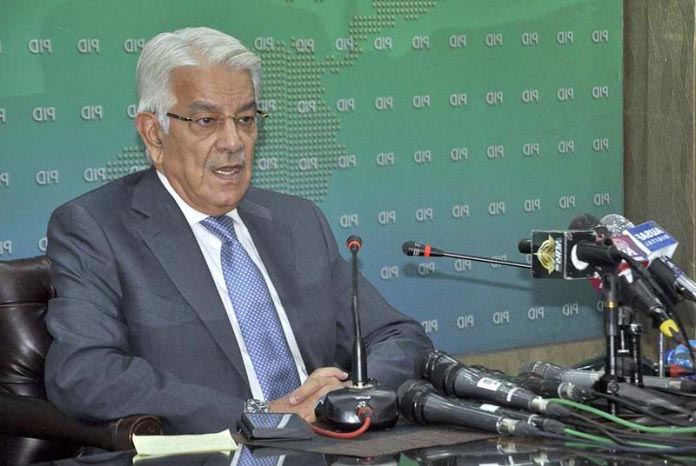 The PTI leadership tried to divert the attention from the Pakistan Election Commission’s decision in the foreign funding case, which was in fact their indictment for using the charity funds for their political motives, he said addressing a news conference.

Khawaja Asif said the foreign funding case verdict, which was announced after eight years, had proved that Imran Khan used the donations for his personal and political gains.

He (Imran) collected funds from across the world in the name of Shaukat Khanum Memorial Hospital, which as social welfare organisation had a noble reputation, but used the same for his political activities, the minister alleged.

He said the PTI had been creating diversions to handle the spillover of thousands of prohibited funding sources come to the fore in the wake of ECP decision.

Khawaja Asif said they did not even spare the Lasbela helicopter tragedy. The entire nation mourned the loss of valiant and capable officers of Pakistan Army in the incident, but the PTI social media team and its “warriors”, fully assisted by their Indian counterparts, run a malicious campaign against Pakistan. Some other countries were also behind the anti-Pakistan drive.

Some 529 social media accounts from Pakistan, 18 from India and 33 from other countries, using different identities, were involved in the dirty social media campaign, he added.

The minister said,“An attack on the army is an assault on Pakistan. The country’s survival is linked with strong defence institutions, and they are inseparable for each other.”

He said an investigation into anti-Pakistan drive was near completion and its results would be shared with the nation soon. Action would be taken against the “culprits” as per law.

There was no political vendetta in the matter as those involved in the anti-state activity would be taken to task according to the law, he reiterated.

The minister said the whole nation shared the grief of the families of Lasbela martyrs as the PTI run their smear social media campaign over the incident.

Commenting on the alleged distractions, he said the PTI’s first diversion was the tweets on the Lasbela incident. The second was of Shahbaz Gill case where Imran Khan first kept mum for six days and then commented that Gill should have abstained from such statement, which showed that the PTI leaders were provoking the army, he claimed.

He also mentioned that the Punjab home minister had rejected Gill’s statements of being beaten up in jail. “They tried to create more diversions on this issue as well but this must stop whereas all departments are active on it.”

“No such step will be taken that may highlight the government’s conduct as a political score settling or vendetta in the social media campaign probe.”

He alleged that Imran Khan had become desperate after losing power. “First he claimed that it (ousting him from power) was a foreign conspiracy and then accepted 36 pickup vans donated by the US Embassy…and now is accusing us of hatching the conspiracy.”

He said Imran Khan held backdoor negotiations with the United States envoy to seek pardon. He even hired a lobbyist on $25,000 per month to improve his relations with the US.

Khawaja Asif claimed that Imran Khan had developed selective amnesia as evident from his deliberate forgetting of statements against the state institutions.

“No patriotic Pakistani will not tolerate such language and cannot even think to use such language (against the state institutions) and that also on the behest of Indians. This was a joint venture of PTI and India against the Pakistan Army.”

He said the Indians were openly claiming at their news channels that Imran Khan through his narrative had strengthened Indian efforts to promote its anti-Pakistan designs.