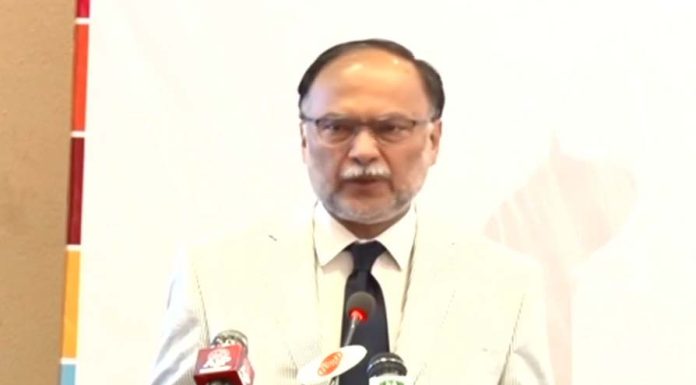 ISLAMABAD: Minister for Planning Development and Reforms Ahsan Iqbal on Tuesday assured the business community to address all the hurdles in export promotion and investment development within 15 days to facilitate them for enhancing local exports while attracting foreign and local investment to achieve sustainable economic growth and in the country.

Addressing All Parties Conference for the Revival of Economy, organized by Islamabad Chamber of Commerce and Industry (ICCI) in collaboration with National Press Club Islamabad, he called upon the business community to identify the hurdles faced by them in exports promotion and investment development and that would be addressed within 15 days.

He also asked for enhancing exports and promoting imports substitute to reduce widening trade deficit and achieving export-led sustainable growth, which was only way to steer the country out of economic crises.

He stressed the need for establishing an export promotion desk in every chamber across the country to increase local exports to attract more foreign exchange reserves for attaining economic sovereignty and reducing reliance on foreign loans.

The minister commending the initiative of ICC said that it was the most vital event organized to commemorate the 75th Independence Day of the country.

He said the most critical challenge faced by the country was economic and political instability, adding that charter of economy would help to formulate long term economic policies for economic growth and social prosperity of the country.

He said that in current period, the countries which were economically strong included in the list of respectable nations, adding that economic instability forced to compromise your autonomy.

The Pakistan has made lots of progress in every field including trade, finance, investment, commerce,  Industry and agriculture, he said adding that the country was still behind when it compared with those nations, which came into existence with it.

He said that when country came into being, it was facing dearth of resources and there was no basic infrastructure available to govern it and was being speculated that this new born country would not survive for a long time.

He said despite dearth of resources and uneven economic and political conditions, Pakistan became atomic power of the world, besides it achieved significant industrial and agriculture sectors growth.

However, he said that if we compare the progress of these sectors with other countries of the world, Pakistan was too behid and continues efforts were required to compete with them.

Ahsan Iqbal further said that when all the political leadership was united, it defeated terrorism, adding that $38 billion investment attract under China-Pakistan Economic Corridor Project and this project had became an international brand for investment and many nations were willing to invest in Pakistan.

He said that then in 2018, the government changed and all economic policies were put on halt, adding that the development budget reduced from Rs1, 000 billion to Rs700 billion and not any fund was released during last quarter.

He said that when the collation government came into power, the speculation was in the air that Pakistan could not avoid economic default and under such circumstances, the government took tough decisions sacrificed its political capital on national interest.

Within 3 months time, the incumbent government not only averted the default risk, but lt also put the economy on sustainable growth and development.

He said that now the government was making full concentration on promotion of education, enterprise development and exports growth to achieve sustainable economic growth.

Speaking on the occasion, Minister for Finance and Revenue Miftah Ismail said that Prime Minister Shehbaz Sharif had repeatedly invited all the stakeholders to formulate a charter of economy to form long term policies for economic development.

He said that charter of economy should not be limited only to the political parties, but all other stakeholders including chambers and media would also be part of it.

He called upon the business community to play their role for human development and contribute their due shares in establishing education and health care  facilities to improve human index in the country.
He said that first time, the government has rationalized it policies by bring a balance in imports and exports, besides enhancing remittances.

He said that efforts were being made to ensure food safety and security, enhancing per acre output and reducing reliance on imported food items.

Speaking on the occasion ICCI President said that the aim of the conference was to develop consensus of political  parties to form long term economic policies that would continued despite the change of regime.

He said all the political leadership were also concerned about the prevailing economic situation and keen to put it on sustainable growth and development.

Speaking on the occasion Khalid Iqbal Malik former Presidents ICCI  suggested to reduce the cost of doing business, consistency of policies and must not influence with regime change.

He proposed to ensure affordable prices of electricity and gas and help the local Industry to adopt innovation to ensure competitiveness.

Among others, the event was also attended by the members of the parliament belonging to different political parties and prominent businessmen, besides a large number of the diplomats of several countries and economic experts attended the conference.

The conference was also attended by the presidents of different chambers of commerce across the country and submitted their proposal for the revival of economy.