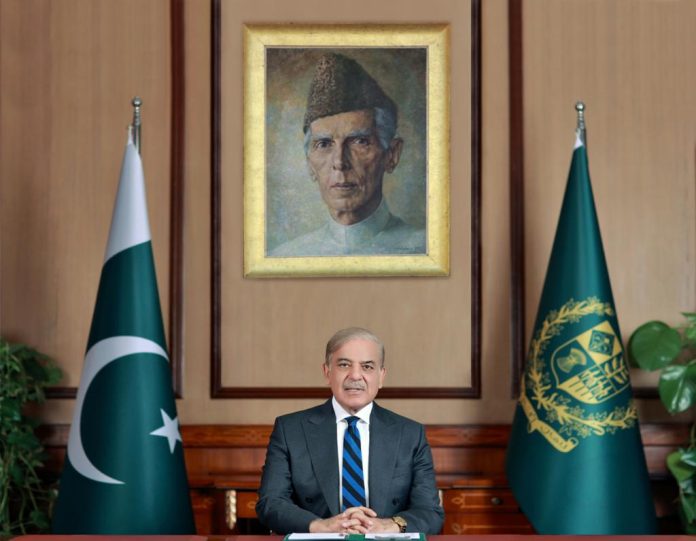 ISLAMABAD: Prime Minister Shehbaz Sharif Saturday saluted the innumerable Pakistanis who sacrificed their lives for Pakistan and felicitated Pakistanis across the world on the occasion of the 75th Independence Day of Pakistan.

In a televised address to the nation, he said history was witness that Pakistan was created after millions of Muslims sacrificed their lives.

“But today mere felicitation is not enough. In the past, we just celebrated Independence Day but did not make enough efforts to achieve the goals of independence so that souls of the Quaid and martyrs are satisfied and in comfort.”

He said Pakistanis enthusiastically and with great joy celebrate the Independence Day of their country and the anniversaries of Quaid e Azam and Allama Muhammad Iqbal, adding, “today we have to accept the truth with an open heart that we cannot give to our younger generation, what it truly deserved.”

He said the Pakistani nation was bestowed with great blessings of Allah and it was guided by the life of Quaid e Azam and thoughts of Allama Iqbal. He asked why such a nation was still striving to find its destination. Pakistan was faced with multiple challenges and the biggest of it was the economic challenge, he pointed out.

The PM said today’s crisis was wavering of the self-dignity and self-confidence of the nation.

The prime minister said the Pakistanis were known for their passion, character and hard work and the best manifestation of these characteristics was the creation of Pakistan.

Pakistan was created with passion aroused by Allama Iqbal in the nation. Then
Quaid-e-Azam changed the dream into a reality of Pakistan, he added.

Shehbaz Sharif said the development of the nation was carried out by the democratic leadership of Pakistan through political and constitutional struggle by facing the facts and acting with sagacity.

The leadership overcame the economic and multiple challenges with patience, steadfastness and wisdom, he remarked.

He said the political leadership gave to the nation a unanimous constitution and brought it together on a united agenda, built institutions and developed the economy, agriculture and industry.

The prime minister said the democratic leadership created job opportunities for people and made the nation respectable in the world.

“This is the nation which initiated Pakistan’s nuclear programme under the leadership of Shaheed Zulfikar Ali Bhutto.”

Then under the leadership of Muhammad Nawaz Sharif, despite all the incentives and pressures, completed the nuclear programme and made defence of the nation unconquerable for all times to come, he asserted.

He said the Pakistani nation countered horrid earthquakes and devastating floods but did not lose heart and continued to move ahead.

“The sons and daughters of this nation raised the flag of the nation in international sports competitions.”

In the current month, during the Commonwealth Games, sons and daughters of the nation including Arshad Nadeem and Nooh Butt achieved successes and made the Pakistani nation proud, he observed.

He said the nation resoundingly defeated terrorism and this happened due to our nation’s determination, strength and confidence.

“This resilience proved that our nation is fully capable to achieve every objective.”
He said today the nation faced another crisis and the seeds of chaos and hate were being sown, nation was being divided in different ways and a nefarious attempt was made to torn apart the national unity.

He said the last government left a trade deficit of $ 48 billion and his government had to take loans from the international monetary fund and friendly countries to meet financial needs.

The previous government took loans of Rs 2000 billion loans in its four years and due to criminal negligence of the previous regime the government was forced to import wheat, he elaborated.

He said the previous government did not buy gas on time from the international market, neglected the energy supplies and damaged the project of China Pakistan Economic Corridor.
“My government strengthened the rupee against the dollar.”

“We have decided to produce thousands of megawatts of solar energy to save billions of dollars spent on imports of oil and gas.”

Shehbaz said independence was unimaginable without achieving economic freedom.
He invited the opposition to sit with the government for formulating the charter of the economy.