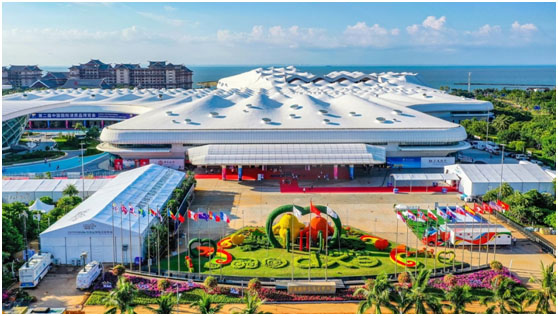 The six-day event received more than 280,000 visits, and increased exhibition space over nearly 20 percent from the previous session. More than 2,800 brands from over 60 countries and regions participated in the event. Over 600 new products were released at the 177 launch events held during the expo.

China’s imports and exports bucked the trend in the first half of this year, with the foreign trade of goods jumping 9.4 percent year on year.

China firmly promotes higher-level opening up and is committed to trade and investment liberalization and facilitation. The hosting of the Hainan Expo bore special significance as global recovery and trade growth remained sluggish.

China’s hosting of the expo, which focused on consumer goods, would have a positive impact on boosting consumption, promoting trade and improving the economy, said Zhang Xiangchen, deputy director-general of the WTO.

He called the expo and the construction of the Hainan free trade port an important measure for China to comprehensively deepen reform, promote higher-level opening up, drive high-quality economic development and promote global trade and economic cooperation.

China has provided a huge market for global enterprises, said Pamela Coke-Hamilton, executive director of the International Trade Center (ITC), a joint agency of the WTO and the UN.

The ITC has established cooperation with the China International Import Expo to help micro- and small-sized enterprises from developing countries seek business opportunities, she said, adding that the WTO-UN joint agency hopes to explore more possibilities of cooperation with the Hainan Expo.

Hainan is working to build a free trade port with Chinese characteristics and global influence. The Hainan Expo demonstrated China’s efforts to give play to the advantages brought by the Hainan free-trade port in comprehensively deepening reforms and putting up the highest-level opening-up policies on a trial basis, and contributed to deepening bilateral, multilateral and regional cooperation.

China, firmly implementing a strategy of expanding domestic demand, gives play to consumption in leading the economic cycle. It has become the world’s second largest consumption market, with expanding consumption and a constant upgrading of its consumption structure.

Compared with the previous year, the Japanese pavilion became bigger and the number of Japanese exhibitors doubled, said Shimizu Kenji, director-general of Japan External Trade Organization (JETRO) Guangzhou. He added that Japanese enterprises took the Hainan Expo as an opportunity to seek growth.

The three major brands under Tapestry, Inc., an American multinational luxury fashion holding company, launched a number of products at the Hainan Expo. They livestreamed the launch events to present their products to more consumers.

Yang Baoyan, President of Tapestry Asia Pacific, told People’s Daily that the company enjoyed robust momentum in China over recent years and announced to set up its China travel retail headquarters in Hainan in April this year.

Honson To, Chairman of KPMG Asia Pacific and KMPG China, said the Hainan Expo has become a bridge matching global products and services and demonstrated the strong appeal of the super large Chinese market. He added that exhibition of premium products from across the world has established a platform for multi-country cooperation.

Another report by Ernst & Young indicated that Chinese consumers showed the strongest awareness for sustainable development among all respondents from 24 countries.