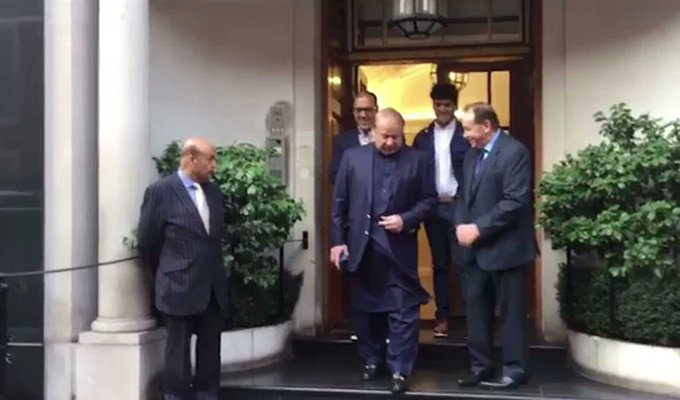 LONDON: After the dollar’s depreciation against the rupee, PML-N supremo Nawaz Sharif shared with reporters in London that Pakistan’s economic situation would further improve in the coming days. “This is Allah’s blessing. We are sinners, but Insha Allah, the country’s situation will improve,” said Nawaz when he was informed of the decrease in the price of the rupee. The PML-N supremo was talking to reporters after meeting former Punjab chief minister Hamza Shahbaz. After holding a meeting with Nawaz, Hamza told journalists that all coalition government parties have unanimously decided to take PTI’s prohibited funding case to its “logical conclusion”. “The nation will hold the so-called Sadiq and Ameen [Imran Khan] accountable for calling others thieves and robbers,” said Hamza. “If Nawaz was disqualified for not taking a salary from his son then Khan is immersed in prohibited funding from head to toe,” he added. Regarding the PTI’s demand for snap polls, Hamza stated that elections will be held as per schedule in 2023, adding that he is hopeful that his uncle will lead the election campaign of his party. The PML-N leader, while commenting on Punjab CM’s election, said that his party will not leave this matter like this and will seek justice from the court. “When a full court will be formed in this matter, then the case will be crystal clear,” he added. Hamza had to quit the office of CM after the Supreme Court gave its verdict on the PTI petition against the deputy speaker’s ruling. Pervez Elahi of the PML-Q replaced him as Punjab CM due to the verdict. Hamza arrived in London on a private visit on Friday .and is expected to stay in the British capital for a few days. During his stay in London, the former chief minister has met party supremo, Nawaz Sharif, who is there since 2019 and other family members.