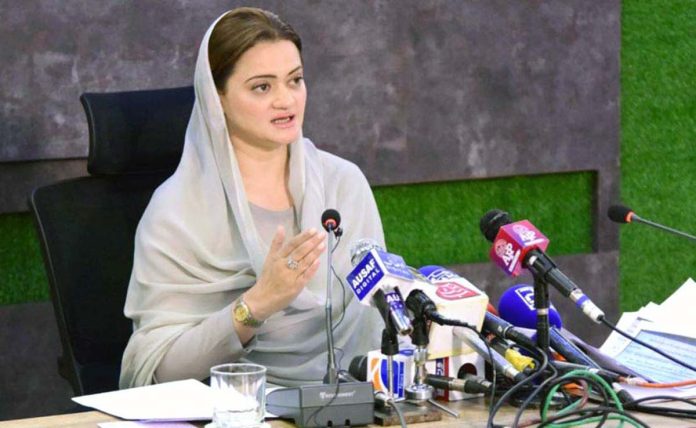 ISLAMABAD:Minister for Information and Broadcasting Marriyum Aurangzeb on Thursday said the Federal Cabinet on Thursday principally decided to send a “declaration” against the Pakistan Tehreek-e-Insaf (PTI) to the Supreme Court in light of the Election Commission of Pakistan’s (ECP) verdict in its prohibited funding case.

“The PTI has been declared a foreign-aided party by the ECP in its decision which was given after eight years under the Political Parties Order 2002 and the Election Act 2017,” she said while addressing a news conference after the Federal Cabinet meeting chaired by Prime Minister Shehbaz Sharif.

She said the Law Minister and ministry briefed the federal cabinet over the legal position of the verdict. The law ministry was given three days time to prepare the declaration for presenting it before the cabinet in its next meeting, she added.

Citing the section 3 of Political Parties Order 2002 which stated that “if a party receives any aid, financial or otherwise from any government or political party of a foreign country or any portion of its funds from a foreign nation”, she said the federal government was legally bound to take action against the PTI for “knowingly” and “willfully” receiving prohibited funding from a number of foreign firms and individuals.

She said the ECP investigated the PTI’s prohibited funding for eight years, while the party sought 51 adjournments, changed nine lawyers and filed 11 petitions with the court for seeking delay in announcement of the decision.

The minister said the PTI got enough time to justify their funding, but it failed to do so and now its leaders appeared in the media to respond to the queries over “foreign funding” to their party.

She said the people needed to understand that it was not a matter between the PTI and PML-N, but rather between the former, the State Bank of Pakistan and ECP.

The case against the foreign funding received by the PTI was filed by its own member Akbar S Babar and the PML-N had nothing to do with the matter, she added.

The minister said other aspects of the ECP’s decision were very important which were related to the “false affidavit” submitted by the PTI’s chairman and concealment of 16 bank accounts opened in the name of its senior leadership including Imran Khan and employees of the party’s secretariat.

She said Imran Khan, as chairman of PTI, had submitted an affidavit with the ECP which stated that “no funds from any source prohibited under the Political Parties Order, 2002 were received by the party; statements contain an accurate financial position and the information is correct to the best of my knowledge.”

Imran Khan submitted the same affidavit to the ECP five times with his signature, Marriyum said while castigating him for consistently telling lies in writing.

According to the Political Parties Order, all the parties had to submit this affidavit with the ECP every year, she added.

As it had been established that the PTI had received foreign funding in the bank accounts of its employees, the cabinet had directed the interior ministry and Federal Investigation Agency to conduct an independent and impartial inquiry into the matter while keeping in view different aspects including money laundering, fake accounts, misappropriation of funds and above all the utilization of donations for the political purposes.

The FIA had directed to immediately start an inquiry in collaboration with the relevant financial and investigative departments in light of the ECP’s verdict, she added.

It was the first time in the history of Pakistan that a party had been declared a foreign aided party, she said, adding the party accounts were used by its leadership for personal purposes.

At the outset of the cabinet’s briefing, Marriyum said fateha was offered for the military officers who embraced martyrdom in Balochistan in a helicopter crash and for those who were killed in flash floods.

The cabinet appreciated Federal Minister for Religious Affairs Mufti Abdul Shakoor for providing best-possible facilities to the pilgrims during Hajj.