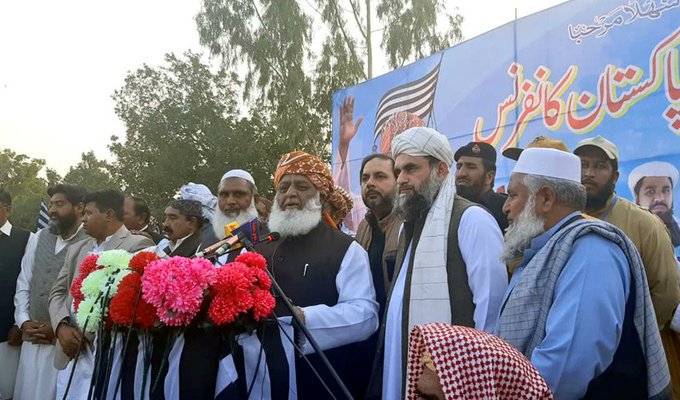 ISLAMABAD: Pakistan Democratic Movement (PMD) chief Maulana Fazlur Rehman Wednesday demanded resignations from PTI Chairperson Imran Khan and President Dr Arif Alvi following the Election Commission of Pakistan (ECP’s) verdict on the PTI’s foreign funding case.  The election commission on August 2 announced the verdict, stating that the party has been involved in accepting prohibited funding. It found that donations poured in from America, Australia, Canada, and the UAE. PTI received funds from 34 individuals and 351 businesses, including companies, the ECP’s verdict stated.  “Not only Imran Khan is a criminal but the whole party constitutes criminals,” said the JUI-F chief while speaking at a press conference in the federal capital. He added that all the coalition parties have urged the commission to take action against the PTI and all those involved in this case.  Fazl said that the members should be arrested and those four employees who received the funding in their accounts should be investigated. “This is now the matter of survival of the state and everyone responsible should stand together to save Pakistan,” he added. The PDM chief said that the verdict has proved that Khan was a “foreign agent with a foreign agenda,” who has taken help from India, Israel, America, Canada, and Finland.  “Imran Khan was putting pressure on the ECP, however, the commission did not get blackmailed. The election commission is an institute and its facts cannot be denied,” said Fazl.  He added that the details were provided to the ECP by the State Bank of Pakistan during PTI’s tenure.