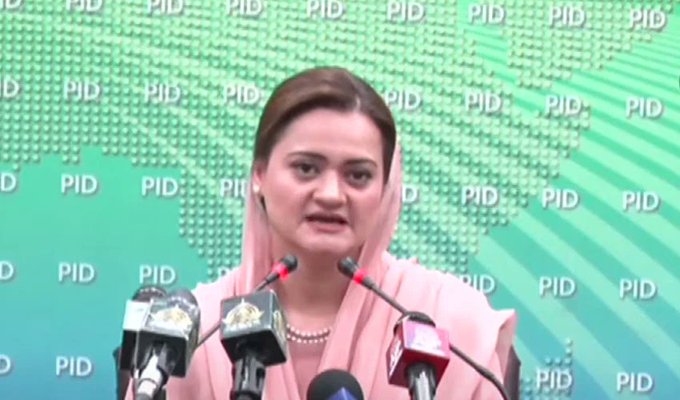 ISLAMABAD: Minister for Information and Broadcasting Marriyum Aurangzeb on Tuesday said the decision of Election Commission of Pakistan (ECP) in the prohibited foreign funding case had confirmed the wrongdoings of Chairman Pakistan Tehreek-e-Insaf Imran Khan.

In a statement, she said that a thief, liar involved in foreign funding and money laundering has finally been caught after eight years.

The minister demanded that as now Imran Khan was no longer “Sadiq aur Amin”, he should tender resignation from the post of party chairman immediately.

Dubbing Imran Khan as a foreign conspiracy against Pakistan, she said that he was a liar involved in forgery and ECP has stamped the fact.

The minister said that Imran Khan took foreign funding from Israel, India, America, Canada and other countries and created unrest in Pakistan with illegal funding.

Imran Khan knowingly took funding from 351 foreign companies and 34 foreigners, she maintained, but submitted fake and false affidavits in the ECP, she remarked.

Imran Khan, she said, kept running 13 illegal bank accounts himself but concealed them from the ECP.
He deliberately received money in the name of his four employees Tahir Iqbal, Muhammad Nauman Afzal, Muhammad Arshad and Muhammad Rafiq.

She said that the proceedings of the foreign funding case the PTI changed 9 lawyers, sought adjournments for 50 times and filed petitions for stay of the case 9 times.

Taking a jibe at PTI chairman, she said, Imran Khan had proven to be a “global money launderer”.
The minister said that the government would implement the decision of the ECP in accordance with the law.

She said that Imran Khan was targeting the ECP because of his theft and money laundering.