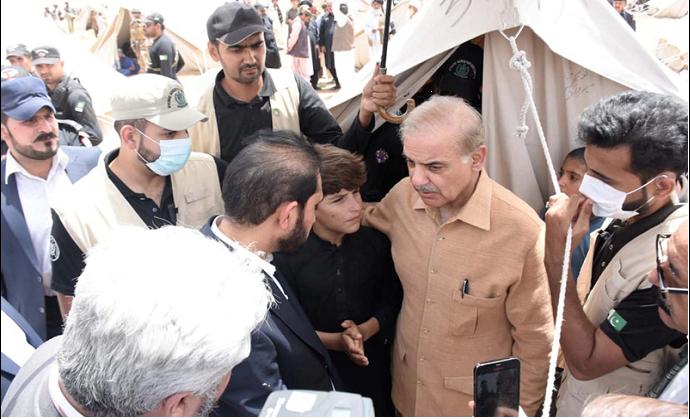 QUETTA: The death toll by the torrential rains and flooding in Balochistan has reached to 142 with Prime Minister Shehbaz Sharif expressing grief over the loss of lives. “The devastations of the flooding in Balochistan are indescribable. The government is working day and night to help affectees,” said the prime minister. He added that the rations are being provided to the victims rescued from the flood-affected areas. The premier maintained that the federal, provincial and other institutions are engaged in relief efforts, while medical camps are being established to curb viral diseases. Earlier, the PM directed authorities to provide relief amounts to flood and rain affectees after heavy downpours wreaked havoc and hampered relief efforts in Balochistan. The Provincial Disaster Management Authority (PDMA), Balochistan, said that among the 136 deceased, 56 were men, 47 children, and 33 women, while 70 people have been injured. PDMA’s report showed that the rains damaged 13,535 houses and completely destroyed 3,406 homes, and the heavy downpour also inflicted damage to 16 bridges and 640 kilometres of roads. Over 20,000 cattle have been killed in the flash floods, eight dam embankments have been damaged, and crops on 198,000-acre land have been destroyed.PM Shehbaz, while speaking to journalists during his visit to a tent village in the Khusnoob area of Qilla Saifullah, said the federal and provincial governments would undertake joint efforts for the relief and rehabilitation of flood-affected people.