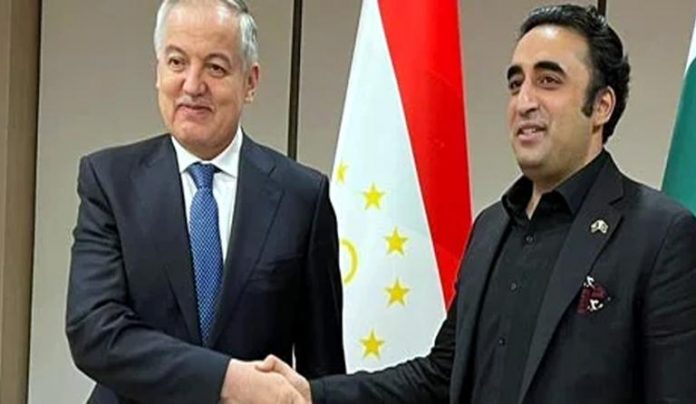 TASKIN:Federal Minister for Foreign Affairs Bilawal Bhutto-Zardari underscored the importance of road and energy connectivity for regional prosperity between Pakistan and Tajikistan. During a bilateral meeting with the Tajik Foreign Minister Sirojiddin Muhriddin, on the sidelines of the Shanghai Cooperation Organisation (SCO) Council of Foreign Ministers Meeting, Bilawal stressed the need for the completion of the CASA-1000 power transmission project in this context. The foreign minister reaffirmed Pakistan’s resolve to further enhance bilateral trade, promote regional connectivity, and strengthen people-to-people links between the two countries.  According to a statement released by the Ministry of Foreign Affairs (MOFA), Bilawal laid emphasis on reinvigorating bilateral economic relations by boosting trade and investment through cooperation in diverse areas and frequent exchange of business delegations. The foreign minister also appreciated the close cooperation between the two countries at the multilateral fora including at SCO and exchanged views on the situation in Afghanistan.   He underlined Pakistan’s efforts for relief efforts and lasting peace and stability in Afghanistan and underscored the need for urgent international humanitarian assistance for the Afghan people. The foreign minister also reiterated Pakistan’s support for a peaceful, united, stable and prosperous Afghanistan. The two sides agreed to continue to remain in contact.