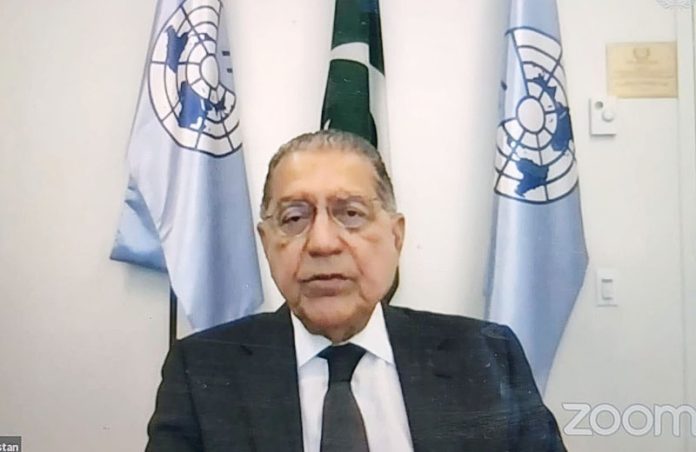 UNITED NATIONS: Pakistan has called on the UN Security Council to effectively address the lingering Palestinian problem “as the first and most urgent priority” to usher in peace and stability in the Middle East. “The festering wound of Israeli occupation and atrocities in occupied Palestine is the principal source of instability, tensions and conflict in the entire Middle East,” Ambassador Munir Akram told the 15-member Council on Tuesday. Speaking in the 15-member Council’s debate on the situation in the Middle East, the Pakistani envoy said that the Security Council had failed to re-assert the principles of the UN Charter and international law in occupied Palestine, nor condemned Israeli violations of human rights, international law and the Council’s own resolutions, and its inability to revive the process to promote the accepted two-state solution. The perpetuation of Israeli occupation will not bring peace to the Holy Land, Ambassador Akram said, adding if history is a guide, even if they are dispossessed and disempowered by Israel, every succeeding generation of Palestinians will persist in seeking their freedom and fundamental rights, including their right to self-determination. The two-State formula, involving the establishment of a sovereign, contiguous and viable Palestinian State, living side by side with Israel within recognized and accepted pre-1967 boundaries with Al Quds al Sharif as it capital offers the only solution to the Palestinian-Israeli conflict, the Pakistani envoy added. At the outset of his remarks, Ambassador Akram said Pakistan was deeply concerned over the deteriorating situation in occupied Jerusalem and condemned the continued killing and wounding of Palestinian civilians, destruction of Palestinian homes, and murder of journalist Shireen Abu Akleh. In this regard, he briefed the Council on the key points of “Islamabad Declaration” adopted by last March’s OIC Foreign Ministers meeting, which, inter-alia:–re-emphasized the centrality of the question of Palestine and Al-Quds Al-Sharif for the Muslim Ummah;–reaffirmed its principled and continued all-level support to the Palestinian people to regain their inalienable legitimate national rights, including their right to self-determination and the independence of the State of Palestine along the 1967 borders, with Al-Quds Al-Sharif as its capital; and,–reaffirmed that Al-Quds Al-Sharif is an integral part of the occupied Palestinian Territory of the State of Palestine and called on the international community to compel Israel, the occupying power, to desist from its colonial practices and abide by all international resolutions on the City of Al-Quds Al-Sharif, and to refrain from all measures, practices and decisions aimed at altering the character and legal status of the Holy City. Ambassador Akram emphasized that Israel’s actions in the occupied Palestinian lands – the seizure of land and properties for Israeli settlements; the violence against unarmed Palestinian children, women and men; and the blockade of Gaza; were grave violations of Security Council resolutions and international law, including humanitarian law. Also, the Pakistani envoy said, there is no moral, legal or political equivalence between Israel, the occupying State, and the occupied and oppressed Palestinian people. “The Palestinian struggle for self-determination and implementation of the UN Security Council resolutions is legitimate; the Israeli repression of the occupied Palestinian people is illegitimate.” He added, “To bring peace and stability to the Middle East, the Palestine Question – the source of the region’s insecurity and its multiple conflicts – must be effectively addressed as the first and most urgent priority.”