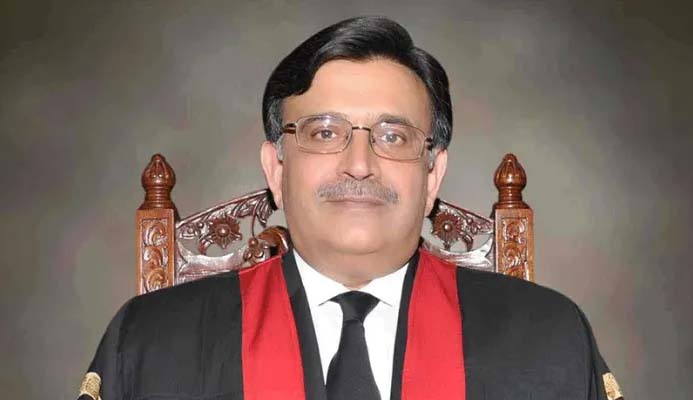 ISLAMABAD: The Supreme Court on Monday rejected the pleas to form a full court bench on petitions related to the Punjab chief minister’s re-election. The short order announced by a three-member bench comprising Chief Justice of Pakistan Umar Ata Bandial, Justice Munib Akhtar and Ijaz Ul Ahsan. The request for the full bench was made by the government during the hearing of a petition filed by Pakistan Muslim League-Quaid (PML-Q) leader Chaudhry Parvez Elahi challenging Punjab Assembly Deputy Speaker Dost Mohammad Mazari’s ruling rejecting votes of 10 PML-Q members cast in his (Elahi’s) favour and announcing Hamza Shehbaz as CM-elect on July 22. During the course of proceedings, Law Minister Azam Nazir Tarar said that arguments on Article 63-A’s review had not begun as yet. It was a grave matter as it pertained to the province of 120 million people. The chief justice reminded the law minister that it was a five-member bench that had sent the previous prime minister home, referring to the court’s unanimous verdict in March that had restored the National Assembly as well as the no-trust move against the then prime minister Imran Khan, which eventually led to his ouster. The CJP referred to federal government’s statements, both inside and outside the court, threatening to boycott the case if a full bench was not formed, and observed that if the incumbent government was not accepting the Supreme Court’s supremacy then it was a matter of grave concern. Minister Azam Nazeer said forming a full court bench would increase the apex court’s judicial credibility. Deputy Speaker Dost Muhammad Mazari’s lawyer Irfan Qadir referred to Justice Qazi Faez Isa’s case, which, he said, was heard by 10 judges. That was the matter of a judge and it was the matter of an entire province. He said he was not saying that the bench’s neutrality was in question. If a full court was constituted, the respect and confidence in the court would increase, he added. Irfan Qadir said the judiciary should also be united in their decisions along with the politicians. The Constitution should be supreme. He said if the judiciary was united in such matters, things would be easy. The need for current hearing arose as there was a contradiction in the SC’s previous decision, he added. The counsel said he had full right to file a review petition and the case should not be heard in a haste. The Supreme Court declared in a decision that the party head had an important role, he added. He said the Pakistan Tehreek-e-Insaf was trying to elect the person as chief minister whom it was calling a “robber”. PML-Q President Chaudhary Shujaat Hussain took the decision as head of the party, he added. He said those who called his a “bandit”, today made him their candidate for chief minister.