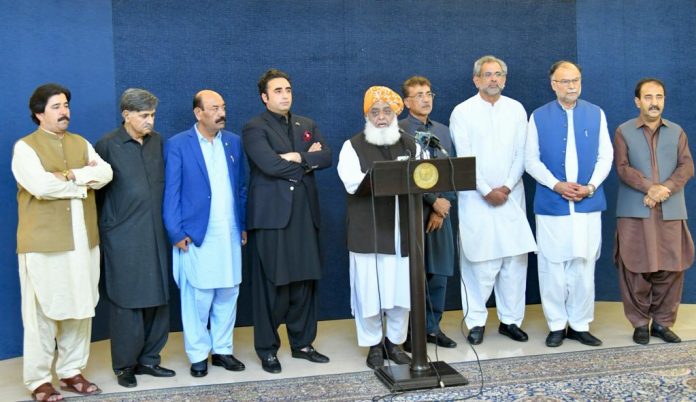 ISLAMABAD: Pakistan Democratic Movement (PDM) – a ruling alliance on Monday demanded the formation of a full court bench of the Supreme Court for a hearing petition regarding the election of Chief Minister Punjab, saying this would defeat all conspiracies against democracy and democratic culture. The PDM leaders said they were not objecting to the powers of the apex court, however, they only wanted all judges should hear the petition and their verdict should be acceptable to all. They opined during the past few years it was observed that a bench comprising specific three honourbale judges has been listening to cases of political nature. At present, a three-member Supreme Court bench headed by Chief Justice of Pakistan, Justice Umar Ata Bandial is hearing the case filed by Pakistan Muslim League (PML-Q) leader Chaudhry Pervaiz Ilahi who had challenged ruling of Deputy Speaker Punjab Assembly during the election of Chief Minister Punjab. Jamiat Ulema-e-Islam Amir and PDM President, Maulana Fazlur Rehman along with Vice President of Pakistan Muslim League-Nawaz (PML-N) Maryam Nawaz, Chairman Pakistan People’s Party, Bilawal Bhutto Zardari, PML-Q’s Tariq Bashir Cheema, ANP’s Aimal Wali Khan, MQM’s Usama Qadri, leader of Balochistan Awami Party (BAP) Khalid Magsi, leader of Balochistan National Party (BNP) Agha Hassan Baloch and independent MNAs Aslam Bhutani and Mohsin Dawar were addressing a joint press conference .centered on the current political situation that took a tailspin after Hamza Shahbaz’s election as Chief Minister of Punjab. Other senior leaders of the PDM and cabinet members present on the occasion included Minister for Interior Rana Sanaullah, Minister for Planning and Development, Ahsan Iqbal, Minister for Information and Broadcasting Marriyum Aurangzeb, Minister for Environment Sherry Rehman, Minister for Power Khurram Dastgir, Minister Communications Maulana Asad Mehmood, and PM’s Adviser Amir Muqam. Pakistan Democratic Movement (PDM) Chief Maulana Fazl-ur-Rehman, while highlighting the current political situation, said, “We want to make the country economically stable. All of us are on one page to set economy on right track and let us do it.” He said the country was facing a serious economic crisis due to the previous regime’s bad governance, but “we saved it from bankruptcy and brought it on road to progress”. The coalition government, he said, desired that a full court bench should hear the Punjab chief minister’s election case. The formation of full court bench was demand of the justice and there should be no controversy in its verdict in the larger national interest.