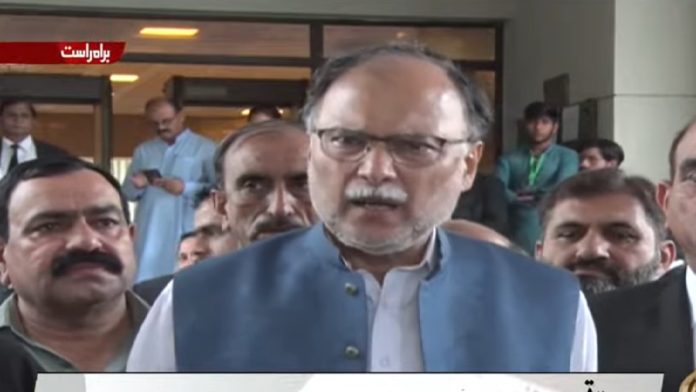 ISLAMABAD: Minister for Planning, Development and Special Initiatives Ahsan Iqbal Monday said Pakistan’s current economic situation could not afford any new political crisis, therefore the genuine demand for formation of a full bench of the Supreme Court to hear the case of Chief Minister Punjab should be accepted. Addressing a press conference here outside the Supreme Court, the minister said the incumbent federal government was taking the economy out of crisis towards stability but “if more political crisis are created, our efforts would go in vain and the country’s economy might be in deep trouble”. He said the dual standards of justice should be stopped against them adding, “we were jailed for months and years on the basis of false cases but the PTI leaders were given free hand”. “If any of the PTI leader is jailed, he/she is released within 24 hours, similarly our name has been in the Exit Control List (ECL) for over three years but the names of PTI leaders in the ECL is removed within 48 hours,” he added. Ahsan Iqbal said Imran Khan and his party leaders repeatedly gave statements against the institutions and the country’s judiciary but nobody takes notice. For seven months, he said, former Chief Minister Punjab Usman Buzdar did not act upon the Court’s order but no one was there to send him any notice. “With due respect we are asking that why the country’s laws apply only to us and not to Imran Khan and his party,” he said adding, “we do not want judiciary to become a party with the political disputes of the country”. Therefore, he said, the whole nation is demanding that the full court bench should be formed to hear the case to avoid any new dispute. The minister said the honorable Supreme Court should hear such a sensitive case with full bench because at this level, after the decision, the chief minister would not have the option to go for appeal. “We want to see judiciary strong and we want to save the judiciary’s honor”, he said adding that Imran Khan was out to sabotage the judiciary’s honor only for his political gains.