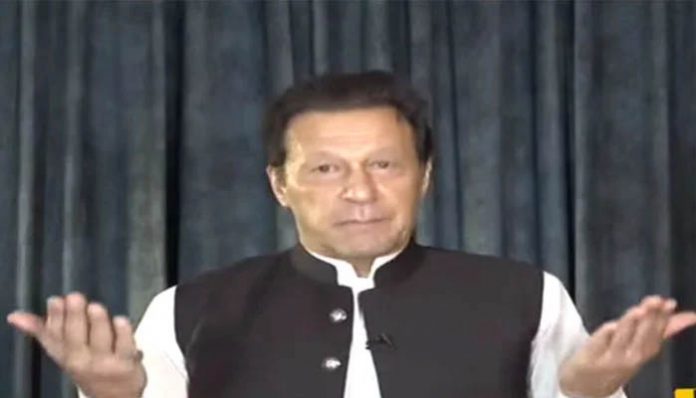 ISLAMABAD: Following Hamza Shahbaz’s surprising victory in the Punjab Assembly, PTI Chairman Imran Khan asked the people to come out on the streets tonight against the deputy speaker’s ruling.   The PTI chairman was addressing the media after after PML-N’s candidate Hamza Shahbaz retained post of Punjab CM against Pervez Elahi in the run off election held in the Punjab Assembly. Hamza’s victory was secured after the deputy speaker rejected PML-Q’s 10 votes.  The PTI chairman told the public that he was in shock to see the incidents that happened in the Punjab Assembly during the runoff election.  The former prime minister also shared that he has always prayed that the country’s democracy goes to a place where it is in the west. He added that democracy has meritocracy and transparency but its foundation is based on “morality”.”Democracy does not have an army. Parliament does not have an army the army is somewhere else. Parliament has one thing which is morality,” said the PTI chairman.   Sharing the example of UK, the PTI chairman said that Britain’s democracy works as Boris Johnson had to resign for holding a party during the coronavirus.  “It wasn’t even news here, he had to resign because of that. Democracy is based on morality,” said Imran.    The PTI chairman reminded the people of the “circus” that was seen in the Sindh House a head of the vote of no-confidence and now today.  “Lawmakers were put up for auction in the Sindh House. Asif Zardari has been looting the country for 30 years. All this horse-trading is happening with the Sindh’s public money,” said the PTI chairman.  The former prime minister said that after he was removed from office he went to the people. Reminding that his peaceful protest was teargassed and homes were raided.  “In the by-elections, people turned out like never before. People came out to reject American slavery,” said the PTI chairman.   “Today was the election of the Chief Minister and at night the buyer of consciences arrived. We got to know at night that Asif Zardari was playing a game,” said the PTI leader. He added that he was in “shock” to see what happened in the Punjab Assembly today.  “These are not politicians, they are mafia, they consider people as sheeps’ and goats. Shujaat’s letter alone is not effective, the decision rests with the parliamentary leader. Whatever happened today will further create economic uncertainty,” said the PTI leader.  The former prime minister said that even he had written a letter directing lawmakers to vote for a certain candidate but that was rejected and the parliamentary leader wrote it instead.  “The nation should protest today, you have to tell that we are humans not cattle. Everyone should register their protest so that they know we are not sheep. They slaughtered the public mandate, now all eyes are on the courts,” said the PTI chairman.  The former prime minister also stated that PML-Q’s parliamentary leader was not Chaudhry Shujaat Hussain as he is the head of the party.  Khan said that in the if small thieves go to jail and big robbers are not caught then the nation would not progress. He added that his government was first brought down at the centre by using stolen money with a foreign conspiracy.  “We will deal with them again and again, they will never let the country progress. As the rupee depreciates, their wealth will increase, their wealth is lying outside in dollars. We will not allow robbers to steal our mandate with stolen money,” vowed the PTI chairman.  Following the call of party chairman, PTI leaders took to their Twitter handles to invite all supporters and workers to gather near main arteries of major cities of Pakistan to register their protest.