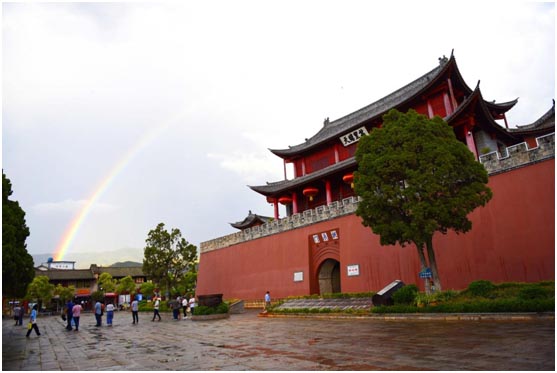 Weishan, an ancient town situated at the foot of Ailao Mountain in the western part of Yunnan province in southwest China, was founded in 1389 with a history spanning more than 600 years.

The ancient town houses a number of historical relics that carry the local features of China’s southwest region. Today, it remains its original appearance and is recognized as one of the best-preserved ancient towns in China.

Viewed from above, the ancient town looks like a chessboard crisscrossed with streets and alleys, with civil residences and ancient temples standing side by side. Small as it may be, the ancient town mirrors the prosperity of Nanzhao, a kingdom that flourished during the 8th and 9th centuries.

Weishan residents start the day with a bowl of noodles at the 25-year-old “Yi Gen Mian” restaurant, which means “a strand of noodle” in Chinese. At 5:00 am every day, the restaurant owner Zhu Zhiqiu would get in the kitchen for preparations.

The noodles, pulled thin and long, and with specially made toppings of diced bamboo and minced meat on them, represent the authentic taste of the ancient town. The noodle-making technique is also an intangible cultural heritage that has been passed down for generations.

Starting from around 6:30 am, students and frequenters would successively arrive at the restaurant. Zhu knows the taste preference of every one of them.

Chen Minghua eats at Zhu’s restaurant almost every day, even having a bowl and a pair of chopsticks of her own there. “We are close neighbors. They pay me on a monthly basis,” Zhu said.

Modern lifestyles once disturbed the slow pace of living in Weishan. For a time, modern schools and hospitals had been built in the core area of the ancient town.

As people gained a growing awareness of the need to safeguard historical sites and cultural features, Weishan moved the schools, hospitals and offices out of its core area, and renovated temples and other ancient architectures there. A museum of Nanzhao culture that collects over 3,000 items has been built.

Today, new inscribed boards and couplets funded by the government are seen on the town’s paifang, a traditional Chinese architectural arch or gateway structure usually found at the entrances of towns and villages, on which the carvings are repaired to show their ancient appearance.

Now, many ancient buildings have been restored to their original glory after preserving and coloring. The easy and slow-paced lifestyle remains.

Fan Jianwei, who used to work for Weishan county’s bureau of culture and tourism, told People’s Daily that resources were exploited purely for better development in the past, but now it needs to be preserved for their historical and cultural values.

Under the joint efforts of the society and government, Weishan is making constant progress on the rational development of the ancient town and integrated promotion of culture and tourism. The town is seeing more and more visitors for its attractive snacks such as dried fruit, bean jelly and green bean cake. Some even stay for days to enjoy a few more bowls of the authentic “Yi Gen Mian” noodle.

B&B hotels are sprouting in the ancient town, and projects that enable tourists to immersively experience Weishan culture and history are also developing. Today, Weishan county is connected to a railway network, and an expressway linking the county and Dali, a popular tourist destination in Yunnan province is about to be put into use.

In 2017, the ancient town was selected by Yunnan province as one of the five world-class characteristic towns. Two years later, it officially kicked off a tourism project featuring the Nanzhao palace.

“The integration of cultural protection and tourism development is an inevitable choice,” said Guo Xiaobin, an official with Weishan county’s bureau of culture and tourism, adding that the ancient county must find a balance between maintaining its original appearance and advancing orderly commercial development.

It should both keep its cultural connotation and historical elements, and take proper commercial management of its ancient architectures, the official said.

Hundreds of years ago, people in the ancient town danced and sang to express their yearning for life. Today, the residents inherit the yearning and pass it to the future. Keeping a slow-paced lifestyle, Weishan is exploring ways to promote its cultural protection and culture-tourism integration.