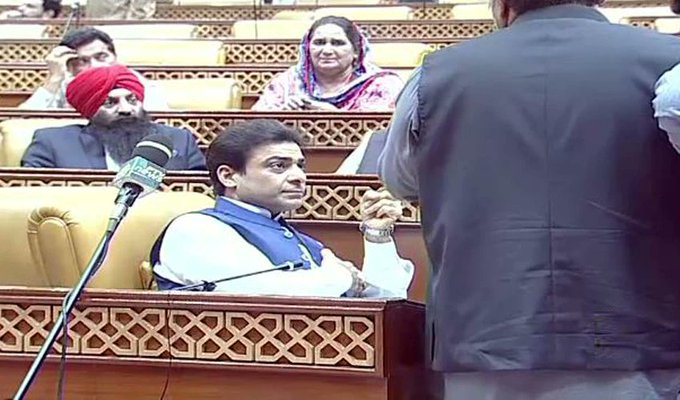 LAHORE: After a dramatic day, PML-N’s candidate Hamza Shahbaz Friday retained the post of the Punjab chief minister against Punjab Assembly Speaker Chaudhry Pervez Elahi through a three-vote victory. Following the counting of votes, Punjab Assembly Deputy Speaker Dost Mazari, citing Article 63A of the Constitution, rejected 10 votes cast by PML-Q members. As a result, Hamza received 179 votes, while Elahi managed to bag 176 votes. As Mazari announced the result, PTI leader Raja Basharat had an argument with the deputy speaker and said that since Chaudhry Sajid was the parliamentary leader of PML-Q, Article 63(A) did not apply to Elahi’s case. “As per Sajid’s instruction, all PML-Q members were to vote for Elahi,” he said, adding that Shujaat’s letter held “no value”. “You are depriving the candidate of his right,” Basharat accused the speaker. As the argument between the two kept escalating, with PTI members refusing to accept the decision, Mazari adjourned the assembly’s session, telling PTI and PML-Q members to “approach the court” regarding their grievances.  The Supreme Court of Pakistan, back in May, had ruled the votes of dissident members of the Parliament (MPs), cast against their parliamentary party’s directives, cannot be counted The apex court, issuing its verdict on the presidential reference seeking the interpretation of Article 63(A) of the Constitution related to defecting lawmakers of the PTI, said that the law cannot be interpreted in isolation. During today’s ruling, Article 63(A) was applied after PML-Q President, Chaudhry Shujaat, wrote a letter to the deputy speaker, saying that he had directed the party not to vote in any party’s favour.