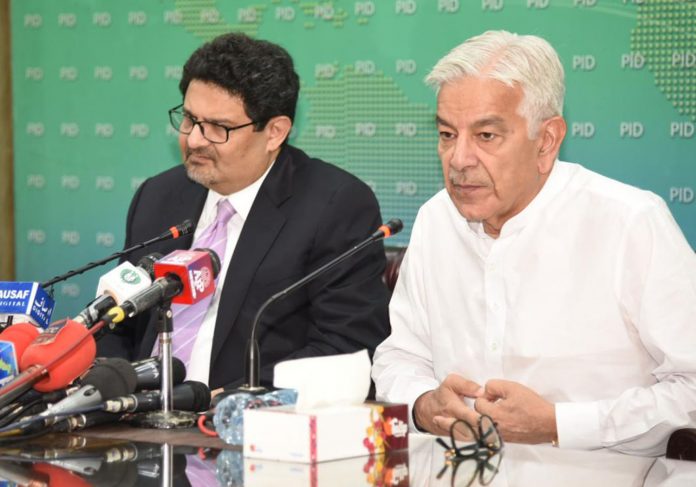 ISLAMABAD:Asserting that economy was going on in positive direction, Federal Minister for Finance and Revenue, Miftah Ismail said here on Wednesday that government had taken result-oriented measures to level imports with exports and remittances. “We are trying to bring imports almost equal to exports and remittances. Because we do not have space in foreign exchange reserves to reduce these and we also do not have other reserves. So we want to strike balance between imports exports and remittances,” the federal minister said while addressing a press conference. The minister said that soon after assuming the power, the government initiated measures to reduce imports and it achieved success in June when the non-energy import bill reduced by 15%.However, he added, the energy imports increased due to price-hike in international market and import bill surged by 120% last month. He said, there were imports of $7.4 billion last month including $ 3.7 billion energy and $3.7 billion other imports. He said, the government had taken many measures including improving LC margins, banning assembled vehicles and mobile phones. It also reduced speed of local manufacturing of cars, vehicles and fridges. It also made it mandatory for $1 lac LC to get permission from State Bank of Pakistan. All this worked and bore fruit as till July 18, there were only $2.609 billion imports, indicating that there would not be more than 5.5 billion imports throughout the month. Last month it was $7.5 billion, so 2 billion was reduced. The current account deficit would also reduce, he said. The minister said, last year there was $48 billion trade deficit and $17 billion current account deficit, which is not affordable for Pakistan. However, it is encouraging that the measures the government had taken helped reduce imports. He said when diesel was sold on subsidy, many dealers had hoarded the commodity for their benefit and currently there were around 60 days diesel against usual 8 days. So there would be less import demand, hence energy imports would reduce. Likewise, fuel prices have also moderated in the international market and have impact on country’s imports. He said, the economic fundamentals of trade have been corrected as imports are almost equal to remittances and exports. There is little CAD, which could be financed. The minister said, the Extended Fund Facility agreement with International Monetary Fund was on track and there was no issue that could halt it. He said Pakistan had already met all the prior requirements for the fund. He said the loan money would be transferred after formal approval by IMF board. He said, this would open up financing from World Bank and Asian Development Bank and bring bout billions of dollars in the country.