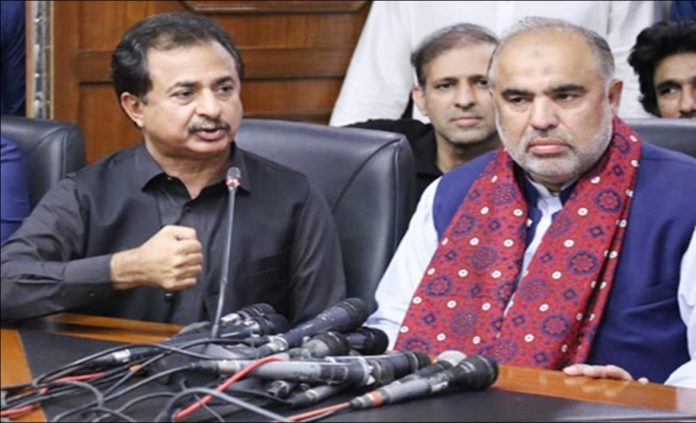 KARACHI: Opposition Leader in Sindh Assembly Haleem Adil Shiekh has said that the imported government got the second phase of local government polls in Sindh because it knew that its component parties would be badly defeated.Addressing a press conference at Sindh Assembly, he said the imported government has seen what is written on the wall. He said PPP, MQM and Jamaat-e-Islami fled from the LB polls jointly. He said these polls were got rescheduled only two days before their polling date. He said during the first phase of elections we went to court that legislation regarding these polls was not done as per Article 140 A of the constitution, but the polls were not postponed. He said two days ago Nasir Shah had written to the Election Commission that preparation were made for holding the LB polls, but due to the fear of defeat, the PPP, MQM and JI fled from the polls.He said in NA 245 our win was sure but these people are afraid of the vote of public. He said whole nation stands behind Imran Khan, and ‘bat’ would get a  thumping victory. He said in the by polls of Punjab the nation has told this loud and clear. He said a horse trading bazaar was held in Sindh House and the trader of turncoats Asif Zardari and his associates were busy in buying Lotas. He said Asif Zardari, Shehbaz Sharif and Maulana are involved in what is happening in the country and they are behind the price hike and inflation. He said appreciation of dollar value has increased the assets of these theives. He asked from Asif Zardari that with whose money he tried to purchase Chaudhry Shujaat in Punjab. He said PMA of Liaqatpur was bought for 40 crore rupees. He said that funds of Sindh were used to buy political loyalties in Punjab in favour of Hamza Shahbaz. He said in Sindh children are dying in Thar. RO plants are closed. There is lack of dog bite vaccine. He said 29 people died of drinking poisonous wine in constituency of Sindh information minister.