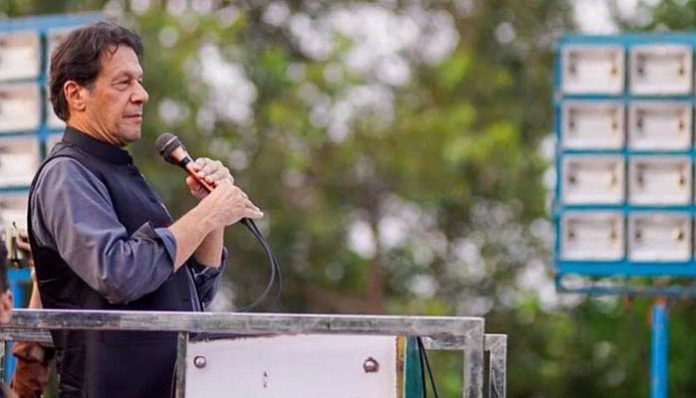 As the race for Punjab’s chief minister’s election heats up, PTI Chairman Imran Khan claimed on Wednesday that horse-trading was happening in Lahore with MPAs being offered Rs500 million to switch their loyalty. “Today, Lahore is seeing a repetition of the Sindh House horse-trading episode that happened in Islamabad, with up to Rs500 million being offered to buy MPAs,” tweeted the PTI chairman. He alleged that PPP Co-chairperson Asif Ali Zardari was the “main architect” behind this, adding that the former president has secured an “NRO for his corruption and purchases people with looted wealth”. The former prime minister also demanded the PPP leader be jailed. “This is not only an attack on our democracy but also on the moral fabric of our society. Had Supreme Court taken action and debarred these turncoats for life, it would have acted as a deterrent,” claimed the PTI chairman. He also asked the “handlers” of the incumbent government whether they realised the “severe damage being done to the nation”. The PTI chairman further claimed that after his government was “toppled with stolen money from Sindh and NRO 2 achieved, certified criminal Asif Zardari in cahoots with Sharif mafia now seeking to steal Punjab people’s mandate by trying to purchase MPAs”. “Want to ask Honourable Supreme Court are they not cogniscant of the damage being wreaked? Isn’t destruction of our democracy, Constitution and nation’s morality a fit case for Suo Moto action? Are the “Neutrals” not realising how our beloved country is literally being destroyed on all fronts by the Imported government brought in through US regime change conspiracy?” asked the former prime minister.  On the other hand, PTI leader Fawad Chaudhry said that the party will move the Supreme Court against horse-trading, accusing the PML-N of giving Rs400 million to PTI MPA Masood Majeed. Speaking at a press conference, the senior PTI leader said that Majeed has left the country and reached Turkey after taking a huge sum of money. “PML-N’s Ataullah Tarar contacted our MPA. They are buying MPAs by giving them Rs350 million,” Chaudhry alleged, saying that there will not be any democracy in the country if this keeps happening. “We want Rana Sanaullah, Zardari and Ataullah Tarar to get arrested and the court to conduct an immediate inquiry into the matter,” he added.  Khan’s tweet came hours after, PTI leader and former provincial minister Murad Raas claimed that the party’s lawmakers were being offered between Rs30 million and Rs50 million each by PML-N to change their loyalties ahead of the vote recount for the Punjab chief minister post. In a tweet, Raas referred to the PML-N as “chors (thiefs)”.