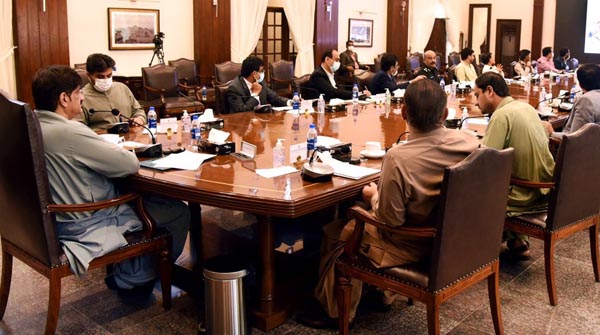 KARACHI: Out of 11 routes of Peoples Bus Service two have been operationalized and six more, including of Larkan are being made operational within next two days while the infrastructure of four remaining routes is being improved to start the bus service. This emerged in a meeting held here at CM House under the chairmanship of Sindh Chief Minister Syed Murad Ali Shah on Tuesday. The meeting was attended by Minister Transport Sharjeel Inam Memon, Local Government Minister Syed Nasir Shah, Administrator Karachi Murtaza Wahab, Commissioner Karachi Iqbal Memon, Secretary Local Government Najam Shah, Secretary Transport Haleem Shaikh, DIG Traffic Ahmed Nawaz, MC KMC Syed Afzal, DG KDA Mohamad Ali Shah, Chief engineer CB Malir, Bashir Mirjat and Kashif Khan of SMTA, and Amir Shah and Shoaib Rafiq of NRTC. The chief minister reviewing the operation and issues of different routes of the Peoples Bus Service directed the Minister Transport to start 30-kilometer Route No. 9 from Gulshan-e-Hadeed to Malir Cantt from Wednesday/today (July 20). “The buses are available, and the route is clear, therefore the service must be started in the public interest,” the CM said. Route No.9 starts from Gulshan-e-Hadeed, via N-5, Quaidabad, Shahrah-e-Faisal, Malir Halt, Jinnah Avenue, Malir Cantt, Check post 6 and check post 5. Transport Minister Sharjeel Memon briefing the chief minister said that the Route No. 1 (Malir to Towner) was 27 km long where 37 buses were plying. He added that the route was operational and has attracted a large number of commuters.  The route starts from Tower, Metropole, Shahrah-e-Faisal, Malir Halt and Khokhrapar. The Transport Minister said that a section of 1.5 km road at Mehran Depot was in shambles and needed to be reconstructed so that the bus could reach Khokhrapar easily. At this the chief minister directed Minister Local Government Syed Nasir Shah to get the road reconstructed by DMC Korangi.  The CM was told that the Route-2 (North Karachi to Korangi Crossing) was 30-km long where 38 buses were operating. The route starts from North Karachi Powerhouse via Nagan Chowrangi, Rashid Minhas Road, Drigh Road, Shahrah-e-Faisal, Korangi-5, 12000 Road Korangi Crossing. Minister Transport said that at two different locations at Korangi Crossing patchwork of the road was urgently required. At this the CM directed the local government department to repair the road through DMC Korangi on urgent basis. The CM was told that the Route-3 (North Karachi to Nasir Jump) was a 38 km route where 38 buses would be made operational on July 22. The route starts from Powerhouse via Ajmer Nagri, Nagan Chowrangi, Shaharahe Noorjahan, Nazimabad Eidgah, Sir Shah Suleman Road, Civic center, Karsaz, Shahrah-e-Faisal, FTC, Korangi Road, Qayyumabad, 8000 road, Shan Chorangi to Nasir Jump. Route-6 (Orangi Town to Singer Chowrangi) would also be operationalized on July 22, Minister Transport Sharjeel Memon told the CM and added that in Orangi, start of the route, a portion of the road has developed crates during the recent heavy rains and was being repaired It was pointed out that the portions of the road from Ajmer Nagri to Shahrah-e-Noorjahan needed to be renovated. The chief minister issued directives for the repair of the road on urgent basis, meanwhile the route would be functionalized on July 22. Similarly, 23 km Route 4 (North Karachi to West Wharf), 28 km Route-5 from Surjani to Masroor Base, 29 km Route 7 from Baldiya to Mosmyat and 29 km Route 11 from Mosmiyat to Dolmen Mall need reconstruction of different portions of the road to make the bus service operational. The chief minister directed Secretary Local Govt Najam Shah to personally visit these four routes and suggest repair of the roads where needed so that they [routes] could be made operational at the earliest.     Larkana: Route-8 is of the Larkana city. The route would start from Larkana Junction, Civil Hospital, Shahi Bazaar, Naudero Chowk, Municipal Stadium, 7 Naka Bridge, Abro Colony, Central Jail upto the Larkana Depot.