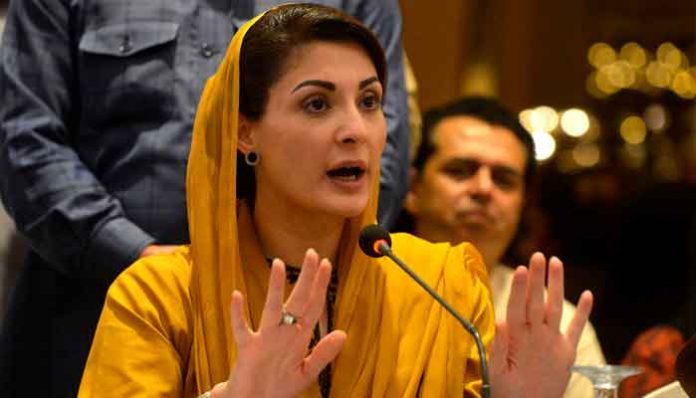 LAHORE: PML-N Vice President Maryam Nawaz Monday called out PTI Chairman Imran Khan and lambasted him for levelling allegations against Chief Election Commissioner (CEC) Sikandar Sultan Raja in his post-victory speech. Taking to her Twitter handle, Maryam advised Khan not to get “over-excited” as he has lost the five out of 20 seats in Sunday’s by-polls. The PML-N stalwart, while commenting on Khan’s allegations against the Election Commission of Pakistan (ECP) and the CEC, said: “Your attack on ECP is not because of rigging that took place yesterday but it is out of the fear of foreign funding case’s verdict [against you].” “You [Khan] know that there is irrefutable evidence against you, which will inevitably be revealed,” she wrote, urging the ECP to announce its verdict soon. On June 21, the election commission reserved the verdict in the PTI “foreign funding” case. Meanwhile, PPP spokesperson Faisal Karim Kundi also said Khan was “blackmailing” the election commission to stop the decision on PTI’s foreign funding case. “Why does Khan take stay orders from the courts if he is not a thief?” he questioned, warning him [Khan] that “lies will not work for too long”.In his televised speech delivered today, Khan said CEC’s actions were backed by “malintent” and added that due to the CEC’s “incompetence”, four million people were shown dead on voters’ lists. Khan said that the PTI had “lawful” eight cases, which the ECP, headed by Raja, rejected to hear. He said that the party then went to the courts to seek justice, where it was served the same. “We do not trust this election commissioner,” he said, demanding resignation from the CEC. Khan also said that despite several cases of rigging during polls being brought before the CEC, he never found anyone guilty — and, as a result, malpractice continued as no one had feared accountability.