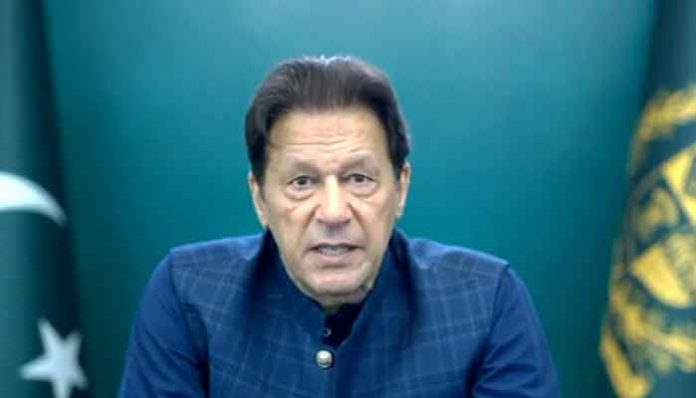 ISLAMABAD: Despite a landslide victory against PML-N in the by-election for 20 constituencies of Punjab, PTI Chairman Imran Khan Monday accused the coalition government of using “every tactic to ensure that we (PTI) lose the polls.”Speaking to the public in a televised speech, he said: “All of the government’s [machinery] was used against us despite the Supreme Court’s order.”Casting aspersions on the way the government managed the Punjab by-polls, Khan said that if the next elections take place “in such a manner, then political instability will exacerbate, not decrease”.The PTI chairman noted that the apex court — in its July 1 order — had ordered the government to not use its machinery for “interference”, but the PML-N “violated” the order.“They interfered in every way; they registered FIRs, used police to harass our people, but at the same time, I salute the police officials who did not pay heed to the government’s pressure,” he said.Khan added that he “remembers” the name of each and every police officer who was involved in harassing PTI workers “and behaving like the workers of PML-N”. Talking about Chief Election Commissioner (CEC) Sikandar Sultan Raja, Khan said that his actions were backed by “malintent”. The PTI chairman said that due to the CEC’s “incompetence”, four million people were shown dead on voter lists. “But apart from that, he wholeheartedly participated in the polling process to ensure that PML-N wins,” the PTI chairman said. Khan said that the PTI had “lawful” eight cases, which the Election Commission of Pakistan (ECP), headed by Raja, rejected to hear. He said that the party then went to the courts to seek justice, where it was served the same. “We do not trust this election commissioner,” he said, demanding a resignation from the CEC. Khan said that despite several cases of rigging during polls being brought before the CEC, he never found anyone guilty — and, as a result, malpractice continued as no one had feared accountability. Referring to the PPP’s landslide victory in the first phase of the local body elections, Khan said that due to CEC’s favouritism, the party’s victory was possible. “He (Raja) is taking money from two sources — the Sindh government and the election commission. His case is pending in the Supreme Court,” Khan said. “Even the election commission tried all tactics to ensure we lose. But we won despite that as people came out to cast their votes like never before.” The PTI chairman said that transparent elections are not possible under the current election commissioner. At the beginning of the speech, Khan — while celebrating his party’s victory — termed the situation a “happy moment”, and said he believes that when a nation developed awareness and starts understanding the vision of the country “then it is a moment to thank Allah.”