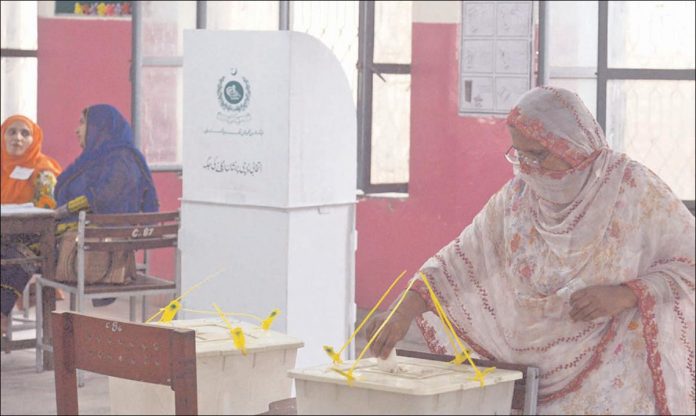 LAHORE: As the results of crucial by-elections on 20 Punjab Assembly seats in Punjab continued to trickle in late on Sunday, the Pakistan Tehreek-e-Insaf (PTI) has emerged victorious in the majority of the seats. According to the unofficial and inconclusive results, the Imran Khan-led party has secured 16 seats thus far. The former ruling party won two .provincial assembly seats from Jhang, three from Lahore and one each from Multan, Rawalpindi, Muzaffargarh, Dera Ghazi Khan, Sahiwal, Khushab, Bhakkar, Sheikhupura, Faisalabad, and Lodhran. According to the unofficial and inconclusive results received so far, the PML-N won only one of the four seats in Lahore while it has an advantage in two other constituencies. Thanking its voters and supporters, the PTI on its official Twitter handle said, “Shukriya Pakistan, the fascist imported government has been defeated!” Senior party leader Ali Muhammad Khan also thanked the people of Lahore for the victory of PTI candidates. As per media reports, PTI candidate Zain Qureshi managed to win in Multan’s PP-217 constituency, according to unofficial results. Son of former foreign minister Shah Mahmood Qureshi prevailed over PML-N’s Mohammad Salman. Zain bagged 47,252, while Salman got 40,203. In PP-288 Dera Ghazi Khan, PTI’s Sardar Mohammad Saifuddin emerged victorious with 58,885 votes whereas his rival PML-N’s Abdul Qadir Khan could only manage 32,907 votes.While instructing his party representatives on duty in all polling stations, PTI chairman Imran Khan has asked them “not to leave their posts till official results have been obtained from the Returning Officers”.