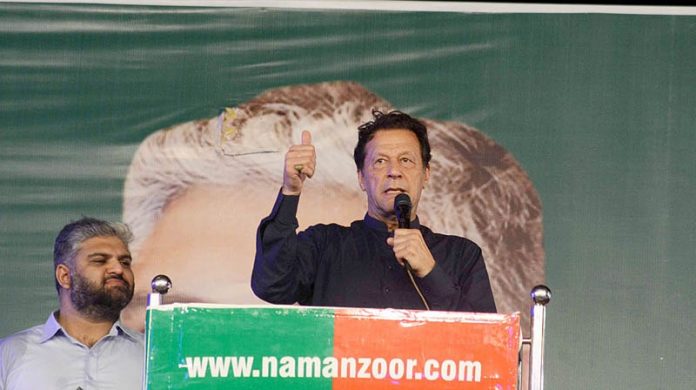 LAHORE: Former Prime Minister and PTI Chairman Imran Khan has asserted that the Pakistan Tehreek-e-Insaf was contesting the Punjab by-elections for ‘real freedom’, ARY News reported on Friday. “American slaves were imposed on the people of Pakistan with the help of Mir Jafar and Mir Sadiq of Pakistan,” the former premier said while addressing a public gathering in Lahore in connection with Punjab by-elections. Imran Khan noted that all surveys have showed that PTI was leading against its opponents in the by-elections while commending the people of Lahore that they have broken the chains of ‘fear’. He said that global crude prices were lower than when the PTI was in power, and even then the government did not reduce prices further. The former premier also criticised the ‘turncoats’, saying that the party workers were they ready to beat the ‘lotas’ as they disgrace the people’s mandate by selling their conscience. “Why should we elect individuals who loot people’s money and shift their fortune abroad,” Imran Khan said, criticizing the PML-N leadership over ‘corruption’ references.   “I have declared jihad against two families – Sharif and Zardari, and we have to defeat them,” he maintained. Imran Khan said that the Election Commission of Pakistan (ECP) accepted in the court that it mistakenly declared 4 million dead, adding that the chief election commissioner (CEC) should step down after this. He alleged that Mr X has prepared 15,000 to 20,000 bogus votes in every constituency to rig the elections.