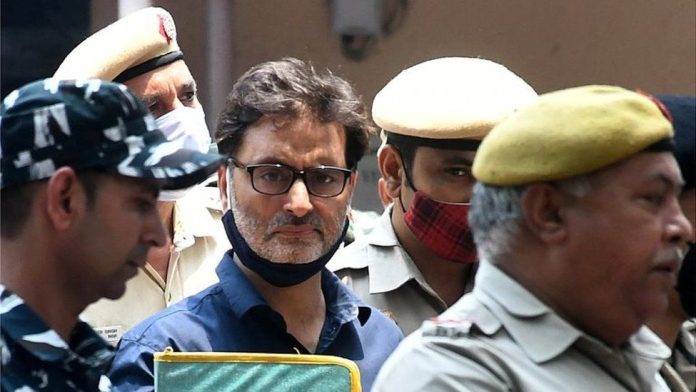 ISLAMABAD: Chairperson of Peace and Culture Organization Mushaal Hussein Mullick has criticized the Indian fascist regime for not providing basic detainee rights to jailed Jammu and Kashmir Liberation Front leader Yasin Malik. Mushaal Mullick, who is also the wife of Yasin Malik, Wednesday in her message asked the Indian government for providing basic rights to Jailed JKLF Leader Yasin Malik. She also asked the Modi regime to produce Yasin Malik physically in court as he wants to cross-examine the witnesses in the Air Force officers’ case. JKLF Muhammad Yasin Malik on Wednesday demanded the court for a fair trial of the cases by allowing him physically witness the court hearings, and by letting him examine the witnesses by himself. Mushaal said that Yasin Malik has been kept in solitary confinement and there are serious threats to his life. If Modi’s regime did not meet the demands of her husband then he will start an indefinite hunger strike in jail from 22nd July and God forbid it can risk his life as well as organs as he is already in fragile health, she warned. She further said that the fascist Modi regime has made all the fabricated cases against her husband to punish him just because he is the peaceful voice of the Kashmir freedom struggle.