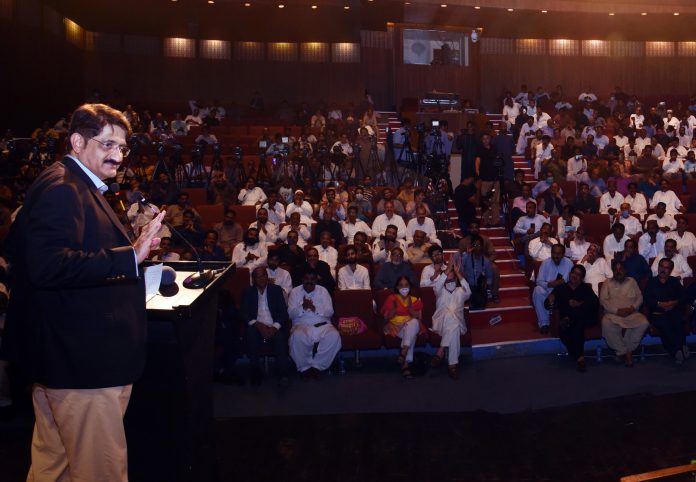 KARACHI: Sindh chief Minister Syed Murad Ali Shah has said that the criminals have no religion, no nationality, and no language but they are terrorists, killers, and enemy of humanity, therefore we should deal them accordingly instead of taking Hyderabad incident in which a young boy was killed as crime by whole community. “A person killed a young boy at a tea shop in Hyderabad and the law has taken its course but we can’t term the incident as the crime by a particular community as a whole.” This he said while speaking on the occasion of 44th death anniversary of a short story writer Naseem Kharal at Arts Council on Thursday. The programme was organized by Sindh culture department and was attended by PPP MPA Naeem Kharal, the younger brother of Naseem Kharal, former Sindh Chief Minister Syed Qaim Ali Shah, Culture Minister Sardar Shah, Leading playwright Noorul Huda Shah, Journalist Ghulam Nabi  Mughal and others. The chief minister said that Sindh was the land of sufi saints who spread the message of love, fraternity, and respect of everyone irrespective of his social, linguistic, religious, and other identifications.  “The lap of this land- Sindh is wide enough and it has taken everyone coming into its sphere into its arms that’s why we, the Syeds and various others who migrated here from other countries became chief ministers and ministers because we have owned it as our mother land,” he said. Mr Shah urged all the people who have taken the law into their hands not to pollute the peace of this city, otherwise “I know how to protect the peace and people of this province,” he warned. Anniversary: Speaking on the contribution of short story writer Naseem Kharal, the Chief Minister said it was the literature that reflected both good and bad values of the society.  “In reflecting the bad values, it makes us to rectify and solve them while in reflection of good values in the society it makes us to emulate – often as reflection, literature presents a picture of what people think, say and do in the society,” He quoted this comment of an anonymous literary personality and said we have gathered here to remember Naseem Kharal, a leading short story writer. Naseem Kharl in his stories highlighted injustice in the society, CM said and added Naseem had the art and know how to animate his charter with powerful dialogues and conversation.  His world fame story `34hon Dar’ – means 34rth gate of Sukkur Barrage, Naseem beautifully explains helplessness of a government servant who finds a body of a young lady stuck in the 34th gate of Sukkur Barrage, the CM said and added the officers went to various authorities to report the case and finally visited a number of police stations of the areas but he was sent back saying that the jurisdiction did not belong to them.