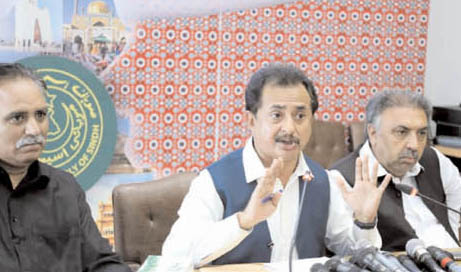 KARACHI: Leader of Opposition in Sindh Assembly Haleem Adil Shiekh said Wednesday that Sindh is drowning in accumulated rainwater but town municipal officers (TMOs) are holding pool musical parties. Addressing a press conference at Sindh Assembly flanked by MPA Shahnawaz Jadoon and Insaf Lawyers Forum president Advocate Riaz Afandi, he said that the ruling party is least concerned about the plight of flooded Sindh. He also shared some videos clips and invitation cards of a pool musical party in Nawabshah of All Taluka Municipal Officers. He said on one hand Sindh is drowned into rain and gutter water and on the other hand local government department Sindh officers are holding pool musical parties using government funds. He said these 30 officers were holding pool musical party two weeks back instead of planning for predicted monsoon rains. He said funds for rain emergency were issued in the same month. He said this party was held at Syed Farm House in village Balo js Quba, a village of Zardari’s ancestors. He said these officers gave a bad name to Asif Zardari and action should be taken against them. He said otherwise we will understand that Sindh ministers, chief secretary and Bilawal House were also involved in this scam. He said Town Officers Muhammad Laiq Zardari, Noor Ahmed Zardari, Ghulam Raza Zardari, Amir Ali Zardari, Kashif Haider Zardari and Noor Muhammad Zardari had hosted these programs and Town officer Gohar Phulpoto accused in NAB.cases, Imtiaz Rahopoto, Fayaz Rahopoto, Khalefo Rahopoto, Yousuf Sheikh, Waleed Shoro and some other 30 officers participated in this musical party. He regretted that instead of wasting these funds in parties they should have been spent of rain emergency arrangements. He said the people of Sindh should make these corrupt officers accountable for their misdeeds. He said in 2020-21, Rs2.14bn budget was tagged for rehabilitation department that was revised and Rs2.15 billion were spent. He said now in 2002-3 Rs1.83 billion are tagged. He asked where these funds are being spent. He said the Sindh government meted out step motherly treatment to megacity Karachi. He said our government had got cleaned Nullahs of Karachi with Rs34billion funds. He said after imported government came these Nullahs were again filled with garbage. He said DHA went drowned due to encroachments on Malir River. He said MQM is playing dramas in Karachi. He said saving PTI, all other parties are supporting the PPP. He said Sindh CM should resign for his worst performance.