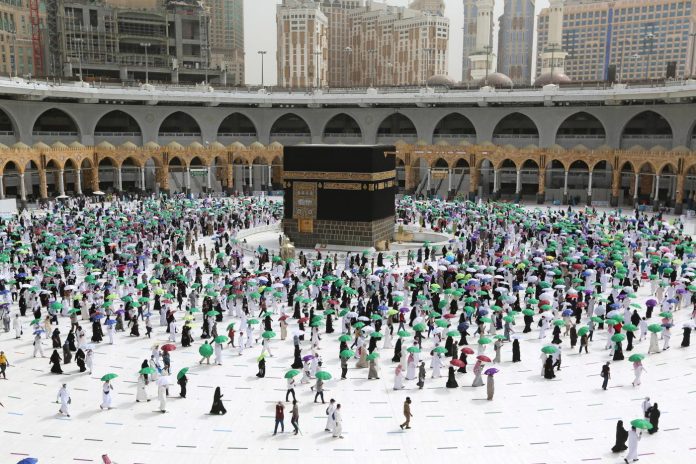 MAKKAH: Sheikh Muhammad Bin Abdul Karim on Friday delivered the Hajj sermon with the status of khateeb [speaker] of Hajj at Masjid-e-Nimrah, as Muslims from across the world gathered in Makkah to offer the pilgrimage which is one of the key obligations of Islam. Huge crowds of Muslim pilgrims scaled Mount Arafat in Makkah early this morning (Friday), the high point of the biggest hajj pilgrimage since the pandemic forced drastic cuts in numbers for two years in a row. In his sermon, Sheikh Karim urged the Muslims to steer clear of everything that is a cause of spreading hatred as per Islamic values. “Islamic values require that one should avoid everything that causes hatred,” he said. The khateeb also said that Allah has repeatedly ordered to maintain piety and only the pious get the closeness to Allah. “Allah says there is a good omen of getting to Jannah [paradise] for the pious,” Shiekh Karim said. He urged the Muslims to worship only Allah who made the sky and earth for them to live, saying that toheed [belief in the oneness of Allah] is the biggest blessing for Muslims. “Fear only Allah, for that is the way to success. No one can relieve your hardships,” he said, adding that success in the hereafter will also be achieved by following the orders of Allah. Sheikh Karim further said that all humans are the children of Prophet Adam (AS), who was created with soil. He said that Muslims are obliged to value and respect humanity As many as 1 million pilgrims are performing Hajj this year. Of these 1 million Muslims, 83,433 pilgrims are from Pakistan. He advised the Muslims to perform Hajj the way Prophet Muhammad (PBUH) did. “Our Hajj will be accepted if we avoided things that have been advised to avoid [during the pilgrimage],” he said.