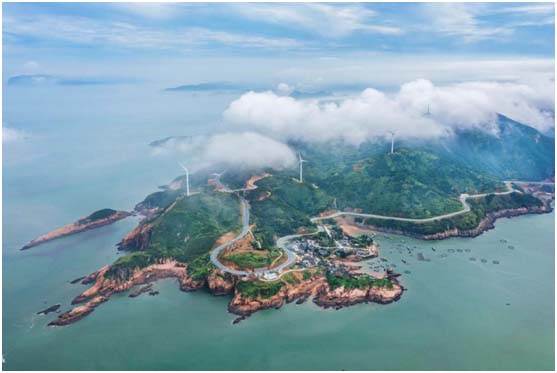 “The kelp production improved 30 percent in the recent two years and our income has increased a lot from years ago,” said Chen Wenchai, who runs an agricultural cooperative in the county.

Boasting a sea area of 28,900 square kilometers, the largest among all coastal counties in Fujian, Xiapu enjoys rich marine resources. It has 420,000 mu (28,000 hectares) of seawater aquaculture area and 260,000 people in the county, or half of its population, are engaged in the fishery sector.

However, the sprawl of offshore aquaculture once seriously threatened local marine ecology, as a large amount of drifting garbage was generated out of aquaculture facilities such as the wooden and plastic foam net cages.

In September 2019, Chen Wenchai replaced his more than 200 wooden net cages with plastic ones. “The water has become clean after the campaign started. There are also designated personnel helping us. We are confident about the production,” Chen said.

The campaign has also lifted the sea view of Xiapu county. Since 2018, the county has vigorously developed tourism and promoted bed-and-breakfast lodges (B&B) clusters in coastal scenic areas.

Meihua village of the county’s Yacheng township has gained popularity because of its beautiful scenery and well-built tourism facilities, with several B&B lodges relying on the mountains near the sea.

“We have a lot of tourists these days. In the past, no one ever wanted to visit here,” said Peng Zugui, a cook at a B&B guesthouse in the village. According to him, the village once suffered from infertile soil and poor transportation, which made villagers wanted to move out to the township.

Thanks to the improved ecology, the B&B business is getting prosperous in the village and has largely improved the income of villagers. “I can earn at least 8,000 yuan (nearly $1,200) a month working in the B&B guesthouse,” Peng told People’s Daily.

He noticed that fruit and tea have been planted in the nearby wasteland in the past two years, and fellow villagers want to seek new business opportunities out of the improved environment and flourishing tourism.

At present, Xiapu is home to more than 400 B&B guesthouses which directly drives the employment of nearly 20,000 people.