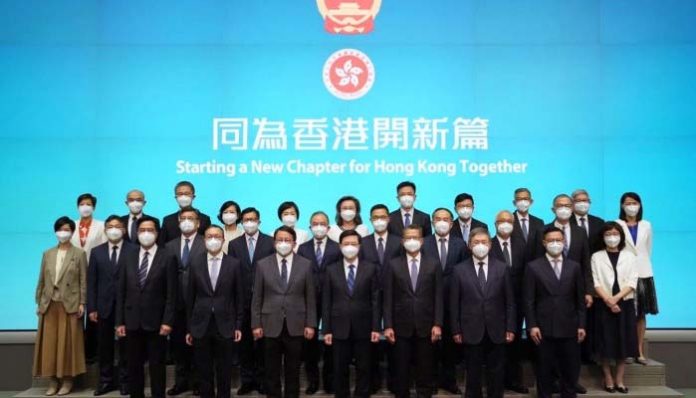 July 1, 2022 marks the 25th anniversary of Hong Kong’s return to the motherland. Twenty-five years ago today, Hong Kong returned to the embrace of the motherland. This ended past humiliation and marked a major step forward toward the complete reunification of China.

Since the very day of its return, Hong Kong has been re-integrated into China’s national governance system, embarking on a broad road along which it and the mainland draw on each other’s strengths and pursue common development, and starting a new era featuring a high degree of autonomy.

Thanks to the support of the motherland and with an international vision and an innovative spirit, Hong Kong has in the last 25 years continued to develop itself as a modern metropolis. The practice of “One Country, Two Systems” in Hong Kong, like the growth of a seedling, has become strong and robust despite wind and rain and yielded many fruits.

Since the 18th National Congress of the Communist Party of China (CPC), the CPC Central Committee and Xi Jinping, general secretary of the CPC Central Committee, proceeding with a strategic view and bearing in mind the big picture, have made a series of important remarks and major decisions on the work related to Hong Kong. The practice of “One Country, Two Systems” has gained new experiences and progress.

Under the support of the Central Government and the mainland, as well as the joint efforts of the government of the Hong Kong Special Administrative Region (HKSAR) and the people of Hong Kong, the special administrative region has constantly developed its economy and consolidated its status as an international financial, shipping and trade center. The democratic rights and freedom enjoyed by Hong Kong citizens are better guaranteed, and progress has been made in all aspects of Hong Kong.

When Hong Kong faced an extended period of damaging social unrest, the CPC Central Committee with comrade Xi Jinping at the core has taken a series of major decisions, based on a clear understanding of the situation in the region. These include enhancing the central government’s exercise of overall jurisdiction over the special administrative region in accordance with the Constitution and the Basic Law, and to improving relevant systems and mechanisms for enforcing the Constitution and the Basic Laws. The CPC Central Committee has pushed for the establishment and improvement of the special administrative region’ legal systems and enforcement mechanisms for safeguarding national security, the enactment of the Law of the People’s Republic of China on Safeguarding National Security in the HKSAR, the refinement of the electoral system of the HKSAR, and the implementation of the principle of patriots governing Hong Kong. The Central Committee supported the special administrative regions in improving the oath-taking system for holders of public office. These measures address both the symptoms and root causes of the unrest, and have restored order to Hong Kong.

Practices have fully proved that “patriots governing Hong Kong” must be followed in order to ensure long-term stability of “One Country, Two Systems.” It is a fundamental principle concerning national sovereignty, security and development interests, as well as the long-term prosperity and stability of the HKSAR.

Only when Hong Kong is governed by patriots, can the Central Government effectively exercise overall jurisdiction over the special administrative region, and the constitutional order established by the Constitution and the Basic Law well protected.

Only when Hong Kong is governed by patriots, can deep-rooted problems be addressed and Hong Kong’s long-term stability ensured.

One who has waded through a muddy road knows the value of a broad path; one who has weathered rains and storms cherishes the warmth of sunshine. The extraordinary experience of Hong Kong in the past 25 years since its return to the motherland fully proves that the implementation of “One Country, Two Systems” is conducive to protecting the fundamental interests of the country, of Hong Kong and of Hong Kong citizens.

General secretary Xi pointed out that despite challenges over the past 25 years, the practice of “One Country, Two Systems” in Hong Kong has been a resounding success.

The motherland, being open and enjoying rapid development, is completely able to offer a strong impetus for Hong Kong to expand advantages, broaden development space and tackle challenges.

In particular, the country’s efforts to build a new development paradigm, advance Belt and Road cooperation, deepen the construction of the Guangdong-Hong Kong-Macao Greater Bay Area and implement the 14th Five-Year Plan for Economic and Social Development and Long-Range Objectives through the Year 2035, are creating new important opportunities for the development of Hong Kong.

Embarking on a new journey, the Central Government will further improve the policies and systems that support Hong Kong to pursue complementary advantages and coordinated development with the mainland, promote institutional innovation in the Guangdong-Hong Kong-Macao Greater Bay Area, give play to the unique role of Hong Kong in the Belt and Road construction, improve the policies and measures facilitating Hong Kong citizens’ study, employment, entrepreneurship, and life in the mainland, and optimize cooperation mechanisms between Hong Kong and the mainland in various aspects.

Facts will keep proving that as long as Hong Kong stays committed to the basis of “One Country” and well leverages the benefits of “Two Systems,” and find its position in national development, it can surely foster new advantages, play new roles, achieve new development, and benefit its citizens with development outcomes.

Today, Hong Kong has returned to the right track of development. Hong Kong citizens need stability and security. Being at a crucial stage of advancing toward prosperity, the special administrative region will further give play to its advantages in its market-oriented, international and law-based environment, talents, cultural diversity, infrastructure and business environment.

Hong Kong compatriots completely have the capability and wisdom to manage, construct and develop Hong Kong well, and will play an important role in national development and even on the world stage at large.

They will keep joining the country’s reform and opening up with patriotism and pioneering spirit, and definitely achieve better personal development as Hong Kong integrates into the national development.

After a 25-year journey that witnessed ups and downs and achieved fruitful results, Hong Kong has come to a new starting point today.

General secretary Xi stressed that the central authorities’ resolve to fully and faithfully implement the principle of “One Country, Two Systems” has never wavered, still less will it change.

Today’s Hong Kong enjoys a foundation more stable than in any other period of history. It can better protect national sovereignty, security and development interests, and better maintain its long-term stability and prosperity.

At present, China has embarked on a new journey to build itself into a modern socialist nation in all respects and achieve the Second Centenary Goal. Hong Kong will definitely see a brilliant future as China pursues its great rejuvenation.

We believe that Hong Kong compatriots will carry forward the glorious tradition of patriotism, forge ahead with the people of all ethnic groups across the country and open up new prospects of “One Country, Two Systems.” Hong Kong will make new achievements on the new starting point and contribute to the great rejuvenation of the Chinese nation.