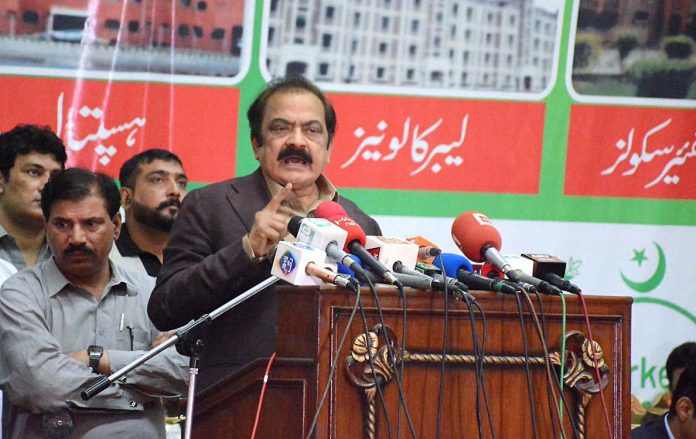 FAISALABAD:Federal Interior Minister Rana Sana Ullah said on Sunday that agreements inked by the PTI government had become a major problem for the government as it had to honor these agreements to revive the IMF program and save Pakistan from default. He was addressing the ceremony of distribution cheques of welfare grant, talent scholarship and marriage grant among workers in the auditorium of Faisalabad Medical University. Rana Sana Ullah put the onus of inflation on the bad governance of previous government and said that it failed to take appropriate measures to facilitate the masses. However, he was optimistic that present government was committed to control the inflation and people would witness a visible positive change in their life just within next six months. He said that PML-N had credit to control load-shedding and terrorism and the issue of inflation was very easy for it to handle through its skilled and visionary leadership. He underlined the importance of workers in national economy and said that Rs.3.5 billion were being distributed among the workers as government fully understood their problems in this age of inflation. This amount would be disbursed among the workers on the eve of Eid-ul-Azha as they remained deprived of their legitimate rights during last 3.5 years of PTI government, he added. He said that it was very shameful that previous government had failed to allocate funds for welfare of the workers despite of resources. He said that last 3.5 years were the worst period for the workers but Prime Minister Shehbaz Sharif and Chief Minister Hamza Shahbaz immediately started work to facilitate the common man. He quoted his recent meeting with IG Police Islamabad and said that our priority was to focus on the common man. “We are not responsible for the inflation. It is only due to incompetence of previous government who first inked the agreement and then violated it which irritated the donors and they withheld the sanctioned amount”, he added. He said that inflation was directly linked with increase in the prices of petroleum products. “We decided to increase prices of petroleum products with heavy heart as there was no other option for us because the previous government had made a clear commitment with IMF to increase the prices”, he said. “Shaukat Tareen singed this document. Hence PTI government cannot befool the masses by putting onus of this increase on the PMLN”, he added. He said that opposition failed to achieve any objective by attacking on Islamabad on May 25. He said that the PTI meeting of yesterday was poor show. There were only 10,000 chairs which also remained empty. Most of the participants were forced to attend this meeting from KPK, he said. He said that people of Punjab had totally rejected the PTI and now he (Imran Khan) was crying for power once again. He said that Imran Khan always dubbed Pervaiz Elahi as biggest dacoit of the Punjab but now he was supporting him for the seat of chief minister Punjab. He said that Imran Khan dubbed his opponents as “thieves and dacoits” but now time had come for his own accountability. He also quoted Farha Gogi and said that 240 Kanal of land was allotted to her in Bani Gala. Now a new scandal in Faisalabad Industrial Estate Development & Management Company (FIEDMC) was surfaced and more scandals of looting and plundering would also emerge very soon. He said that Imran Khan had used NAB as a tool for political engineering and victimization of his opponents. “However we would conduct transparent investigation to expose the so-called saint of the PTI”, he added. Responding to a question, he said that Imran Khan himself was a big looter but he was fingering towards others. “We would not victimize him but he must be punished for what he had done against the state and people of Pakistan”, he said and added that all this process would be completed in a most transparent manner so that no one could term it victimization. “Prime Minister Shehbaz Sharif has full confidence of allies and all our partners are happy and comfortable with Shahbaz Sharif”, he said and added that this government would complete its tenure and the elections would be held in time.