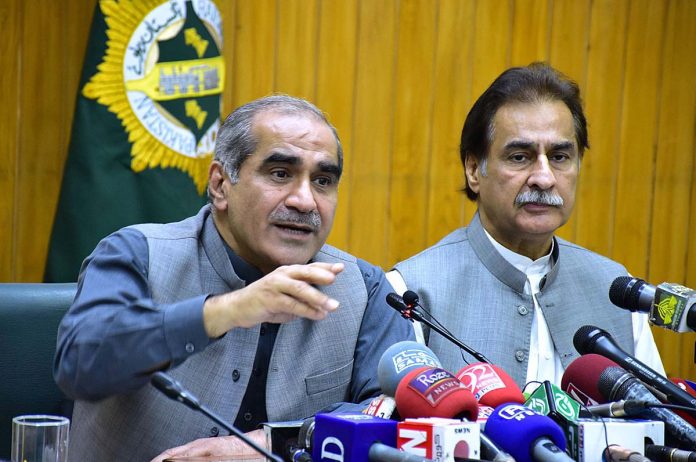 LAHORE:Railways and Aviation Minister Khwaja Saad Rafique said on Sunday that the nation was facing the consequences of wrong decisions of former prime minister Imran Khan and his incompetent and ineligible government. Addressing a joint press conference with Federal Minister for Economic Affairs Sardar Ayaz Sadiq at the Railway Headquarters here on Sunday, he said that the Imran Khan government destroyed almost every institution and department of the country. Citing the example of Pakistan Railways (PR), he said the PTI government increased deficit of the railways to Rs 45 billion, which is only one department. He said that whatever Imran blamed on others, he himself did that, adding that he (Imran) was himself a habitual thief, looter and cheapskate. “He always keeps an eye on others’ pocket,” he added. Kh Saad said that Imran was living in a 300-kanal house in Islamabad, and paid a minimal tax, but never answered the questions about his business. “He blames others that their children live abroad, but never tells that where his own children were living,” he said. The minister said that Dr Israr Ahmad (the late) and Shaheed Hakeem Saeed had long ago informed the nation that a project would be launched under Imran Khan to destabilise the country. “Now this stupid person is calling the establishment to intervene in the political affairs,” he said. Saad said that Imran Niazi always denigrated the Constitution and used foul language against those who do not toe his line. He said that Imran was a dictator by nature who did not like to listen to any other voice, adding that he (Imran) was an imbalanced and thankless person, who always damaged his friends. He said that this stupid person even did not listen to those forces who had supported him in politics. “He even does not know the names of his allies,” he said. Saad Rafique said that Niazi did everything that could destroy the country, adding that he (Imran) signed an agreement with the International Monetary Fund (IMF) which was damaging for the country, whereas the PMLN government, before 2018, had said good bye to the IMF and reduced the load-shedding to zero. “It was very easy for us to announce elections after successful move of no-confidence against Niazi, but no one would listen to the caretakers,” he said and added that such situation would have not been good for the nation. “You have brought the country to a point from where return is very hard,” Khwaja Saad told Imran Khan. Saad Rafique asked if its was not an unconstitutional act to call an institution to intervene in politics? He alleged that Khan used dirty language against institutions and ask his followers to follow suit. “Are you following any agenda against the nation?” he questioned. What did the previous government do in Punjab, he asked. He said that amendments to the National Accountability Bureau (NAB) law had been introduced in line with the directions of the courts. Kh Saad saild Imran Khan was a puppet in the hands of negative forces, who were using him against institutions and patriotic political parties. He said that the coalition government would try its best to block his (Imran’s) way to the power so that the country could be protected from him. Federal Minister Sardar Ayaz Sadiq said that Imran Khan had made a dangerous agreement with the IMF and now the present coalition government was trying to control that damage. He said that the PTI government adopted a criminal silence on the Kashmir issue as it had to fulfill its promises made with former US president Donald Trump. “Imran government did not made long-term agreement for purchase of LNG, which resulted in unprecedented inflation,” he said. Ayaz said that it was Imran who threatened the Pakistan Army saying that it would be broken in pieces if he (Imran) did not stay as the prime minister. “He is a selfish person,” he added. The minister said that a reference was in process against Imran Khan about Toshakhana embezzlement. He said a resolution had been moved for implementation of Article 6 against Imran Khan over a statement against the country and the Pakistan Army. He appealed to the National Assembly speaker to put the resolution on agenda. He said that Imran Khan now wanted the establishment not to remain ‘neutral’ which itself was a violation of the Constitution. The ministers appealed to the Election Commission of Pakistan to announce the verdict in foreign funding case at the earliest.