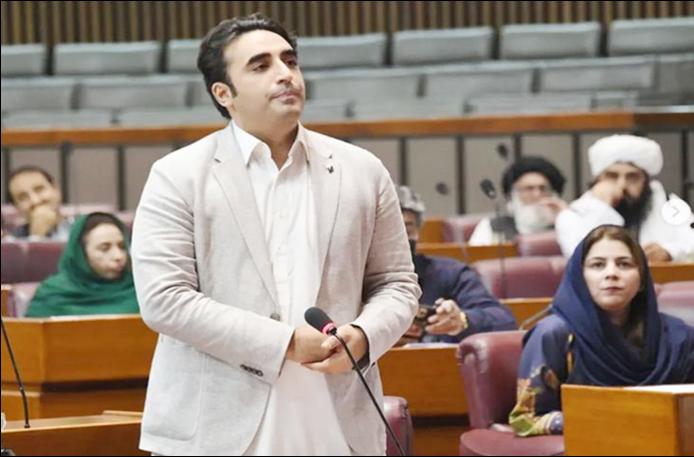 ISLAMABAD: Foreign Minister Bilawal Bhutto Zardari on Wednesday said his party was struggling to strengthen the democratic norms in the country for the last three generations as its leadership always stood firmly against non-democratic forces. On a point of order he said “PPP is struggling for strengthening democracy, free, fair and transparent elections, besides economic rights of the people for the last three generations”. He said the PPP had always fought against dictators and cruelty. He said workers and leaders of the PPP had rendered matchless sacrifices for the cause of the democracy and supremacy of the parliament. Bilawal said despite rigging in all elections by opponents, the PPP were always given a chance by the people to govern the country. “To stop the party of Shaheed Zulfiquar Ali Bhutto and Shaheed Benazir Bhutto, a system of rigging had been developed,” he added. Despite all odds, he said the PPP launched a vibrant movement to hold free, fair and transparent elections in the country. “PPP always stood against rigging” he added. Local government elections recently held in Sindh Province were being discussed in the National Assembly, he said adding “it is an obligation for me to make the record correct and answer the questions raised by the members.” He said it was appropriate for the members to raise the issue of local bodies in the Sindh assembly. He said the PPP was a popular party in the Sindh province and swept the recently held local body elections. The minister said the political parties that made hue and cry were approached by the Sindh High Court just a day before the election to flee from the election process. He said opposition parties were well aware of the fact that during the next phase of the local body election, to be held after one month in Sindh, the PPP would again make a clean sweep. After the electoral reforms, he said, level playing field would be given to all the political parties in the next general elections. “Whenever there is a level playing field, PPP always performs well in the elections,” he added. He said it was unfortunate that the PPP was blamed for rigging the local government election held in Larkana. “I will identify myself if someone is found involved in rigging, but allegations of rigging against PPP is unfortunate,” he added. The minister congratulated Speaker National Assembly Raja Pervaiz Ashraf for conducting the proceedings of the House efficiently and giving maximum time to opposition members to speak on budget. He reminded that during the past regime of Pakistan Tehreek-e-Insaf, the then opposition parties were not given fair chance to speak in the House on various issues. “Despite less opposition members, they are given a chance to speak on budget, current economic situation and difficulties the people of the country are facing,” he added.