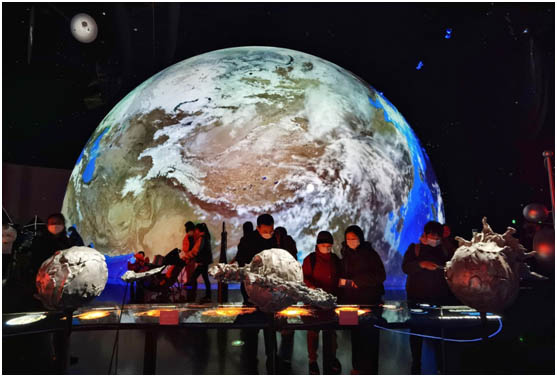 An international research team led by Li Di, a researcher with the National Astronomical Observatories (NAO) under the Chinese Academy of Sciences, lately detected and localized FRB 20190520B, the world’s first and only persistently active repeating fast radio burst (FRB) so far, with the help of China’s Five-hundred-meter Aperture Spherical Radio Telescope (FAST), known as the “China Sky Eye”.

The discovery was made through the Commensal Radio Astronomy FAST Survey (CRAFTS), a novel and unprecedented commensal drift scan survey of the entire sky visible conducted with FAST.

The study was published in international academic journal Nature on June 9, 2022, Beijing time.

FRB is the brightest radio burst known in the universe, and can release within one millisecond as much energy as that radiated by the sun in about a whole year. Nearly 500 FRBs have been reported worldwide, among which less than 10 are active with frequent bursts in certain phase windows. No persistently active repeating FRB had been found until now.

As the world’s largest single-dish radio telescope, the “China Sky Eye” began searches for FRBs several years ago. On May 20, 2019, scientists detected a repeating FRB using FAST, which was later named FRB 20190520B.

When it was first detected, the FRB already showed signs of activity, according to Niu Chenhui, first author of the paper and a young scholar at the NAO.

“We detected three bursts within 10 seconds under one wave beam. Twenty seconds later, we detected one more burst when another wave beam swept it,” Niu recalled.

Based on the time of these four earliest bursts detected through the drift scan survey using the FAST and the pointing location from the telescope, researchers narrowed down the source of the bursts, providing more accurate and reliable information about the FRB’s location for follow-up study.

Later, through observations carried out using multiple pieces of international astronomical equipment and on the basis of data from interferometer arrays and optical telescope, researchers concluded that the host galaxy of FRB 20190520B is a dwarf galaxy with a redshift of 0.241 that is 3.3 billion light-years away from the Earth.

According to Li, the world’s first persistently active repeating FRB has shown features that are more distinct in many aspects than those of FRB 20121102A, the first repeating FRB found by humankind in 2016.

While FRB 20121102A was only active in certain periods, active and repeated bursts of the FRB 20190520B have never ceased, with several hundred bursts already detected by the “China Sky Eye”, Li pointed out.

Continuous observations using the FAST are expected to help create a brand new evolution roadmap of the FRBs, Li said.

The discovery of the world’s first persistently active repeating FRB has challenged traditional views about chromatic dispersion analysis of FRBs, and laid a foundation for modeling the evolution of FRBs and understanding this violent and mysterious phenomenon in the universe, Li added.

After they were published, the preliminary results of the study have attracted widespread attention from the international astronomical community. The important discovery has been followed by several articles on FRB modeling, with their topics covering FRB scattering timescale models, supernova explosion explanations, etc.

The CRAFTS has found at least six new FRBs, making unique contributions to uncovering the mechanisms of this mysterious phenomenon in the universe and advancing research in this new field of astronomy.