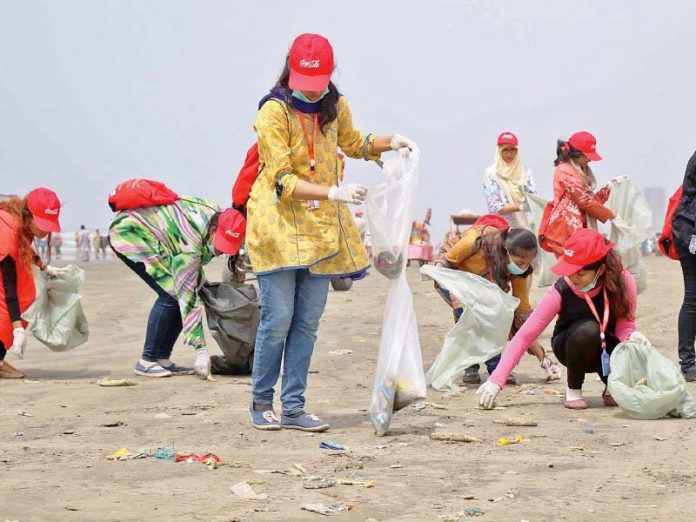 KARACHI: The Pakistan Red Crescent (PRC) Sindh Branch launched a beach cleaning drive in Karachi on June 27, 2022. Hundreds of students belonging to various Universities, colleges and schools of the metropolis, the general public, Red Crescent staff and volunteers participated in the beach clean-up drive inculcating a sense of ownership and civic responsibility as they played their role in reducing plastic waste and marine pollution by collecting and sorting plastic disposal at the Karachi Sea View shoreline. This program was a joint venture of  Climate Advocacy and Coordination for Resilient Action (CACRA) and  Urban Action Kit (UAK)  projects funded by the German Red Cross (GRC). The activity’s major goal was to mobilise communities to participate in a healthy activity and involve people in removing garbage and debris from beaches, as well as to identify the causes of the litter, modify polluting behaviours, and increase awareness of the scale of the marine/beach debris problem. Muhammad Sajjad, Programs and Disasters Management Manager of PRC-Sindh, said the multiple consequences of Climate Change required stakeholders and communities to work together for Climate Change Adaptation. He added that CACRA was launched by the Pakistan Red Crescent with the support of the GRC in 2017. It’s one of CACRA’s components that seeks to improve collaboration with stakeholders to address climate change impacts in localised regions and build Disaster Risk Management tools. Previously, PRC-Sindh signed a joint declaration on climate change with many stakeholders and is working to raise climate change awareness in Pakistan, he added. Ghulam Rasool Farooqui, Program Coordinator GRC in Sindh, stated this initiative is also a part of the UAK project, which is a quick-start, low-cost, do-it-yourself guide to urban resilience activities that increase a community-based organization’s visibility and engagement on urban issues. He stressed that people should understand the value of cleanliness. Our religion also teaches us to keep the environment clean. He urged that all visitors refrain from dropping garbage on beaches and instead collect it and dispose of it in trash cans.