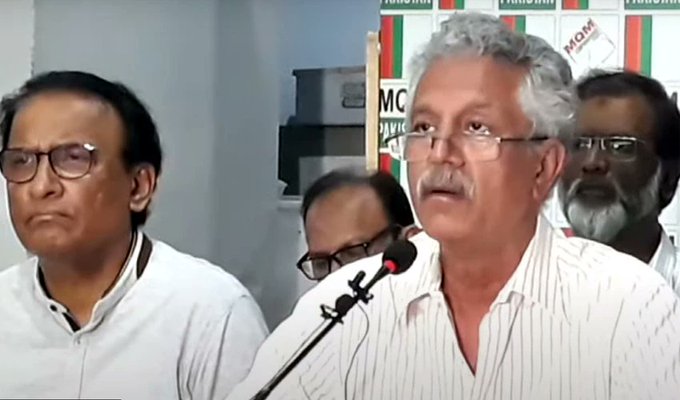 KARACHI:MQM-Pakistan asked Prime Minister Shehbaz Sharif to intervene in the implementation of the agreement with PPP over supporting the coalition government, Geo News reported Sunday. The agreement between PPP and MQM-P was signed after the MQM-P — which was one of the major allies of the then PTI government — announced that it had formally decided to side with the joint Opposition ahead of the no-confidence motion against Prime Minister Imran Khan. According to the text of the signed document, the Supreme Court’s decision regarding the local government shall be implemented in letter and spirit within one month with the mutual agreement of PPP and MQM-P. Speaking during a press conference in Karachi, MQM-P leader and former mayor Wasim Akhtar expressed concerns over the delay in progress regarding the agreement between MQM-P and PPP. “We have told Prime Minister about the current situation as no progress has been made yet with the Sindh government over the agreement,” he said. Akhtar said MQM-P wants rural and urban area issues to be solved as PPP chairman Bilawal Bhutto and co-chairman Asif Zardari also want a sovereign local bodies system. “…but with the formation of the coalition government, now everyone is enjoying power, however, no progress is being made towards fulfilling the agreement,” he added. The former mayor warned the coalition government of withdrawing support and said he “will not stand with the government unless a new local government act is formed.” “[The] Sindh government is still hesitating in transferring powers to the lower level, therefore if the draft of local government acts is formed, it should be enacted immediately,” he demanded. Wasim Akhtar said he still trusted the promises of Asif Zardari and Bilawal Bhutto and believed that the Supreme Court’s order would be implemented completely in the local bodies system. Expressing severe concerns over the incidents of violence during the LG polls in the province, the MQM-P leader raised questions over the Election Commission of Pakistan’s (ECP) performance. “Voters are frightened due to the firing and dacoits took away ballot boxes from the polling stations. Therefore, fair elections could not be possible in this situation,” he said. Senior MQM-P leader had demanded the ECP stop the election process immediately.