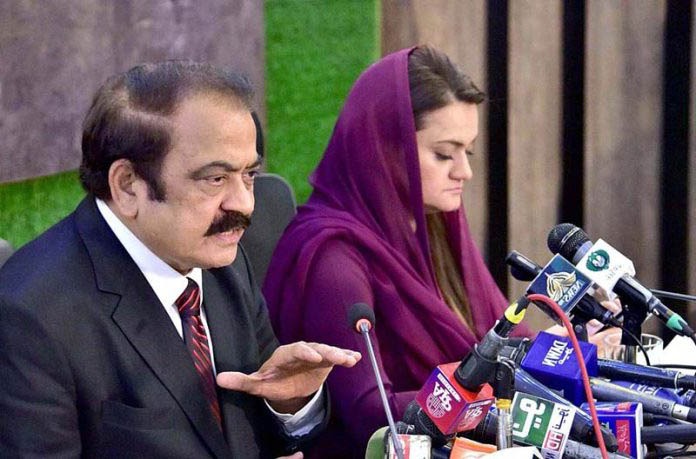 ISLAMABAD: Interior Minister Rana Sanaullah said Wednesday that negotiations with the outlawed Tehreek-e-Taliban Pakistan (TTP) will be held under the Constitution of Pakistan. Sanaullah was addressing a press conference alongside Information Minister Marriyum Aurangzeb after an important meeting on national security was chaired by Prime Minister Shehbaz Sharif. “A detailed session was held on the [security situation], where the military leadership briefed the committee,” the interior minister told the journalists. Sanaullah assured that negotiations will be held under the constitution and peace will be secured through the talks. The meeting of the parliamentary committee took place at the Prime Minister’s Office, where representatives from all coalition partners, security apparatus, and other officials were present. The interior minister, without specifying a date, said an in-camera session of Parliament will be called to take lawmakers into confidence regarding the decisions related to national security. A statement issued from the PM’s Office after the press conference stated that institutions overseeing the national security briefed the participants on the overall security situation of the country. The meeting, according to the statement, was informed that Pakistan played a responsible and positive role for peace in Afghanistan. “The meeting was told that Pakistan will continue its constructive role for peace and stability in Afghanistan. It also hoped that Afghanistan’s soil would not be used against Pakistan,” the statement said. The institutions told the meeting that Islamabad has fought terrorism to bring back peace to the country, which was also appreciated by the international community. The meeting was also apprised in detail about the negotiations with the TTP. It was given a briefing on the timeline of the talks — from the day they began and what has transpired till now. The statement added that the meeting was told that the Afghan government is playing a mediator’s role in the talks with TTP and the negotiations are underway with a delegation that has members from the civil and military leadership. “The talks are in line with the Constitution of Pakistan and the final decision will be made under the constitution and approval from the parliament,” the statement said. The political leadership, according to the statement, expressed satisfaction over the strategy to deal with the situation. Moving on, the interior minister, during the press conference, responded to PTI Chairman Imran Khan’s allegations about the amendments to the National Accountability Bureau (NAB) law. Sanaullah said by amending the law, the government has abolished the anti-graft watchdog’s ability to secure a 90-day remand.“PTI […] and Usman Buzdar will benefit from it as well.” The interior minister said Khan claims that nobody can be arrested after the amendments made to NAB law. “You (Imran Khan) should be happy, even if you can’t be arrested.” “In your government, the previous laws were still intact. What did you do? Against whom were you able to prove a case in the last 3.5 years?” the interior minister asked. The interior minister alleged that Khan misused the institutions to make false cases against his political opponents, including Prime Minister Shehbaz Sharif. The former prime minister a day earlier called for throwing incumbent rulers behind bars for “shamelessly” passing the amendments to the NAB law. “They should be put in jail for their shamelessness. Nobody can pass such laws the way this government did,” the PTI chairman said while speaking during a press conference. Sanaullah, repeating Law Minister Azam Nazeer Tarar’s statement, said that the new NAB law includes 85% of the amendments that the PTI made through ordinances.