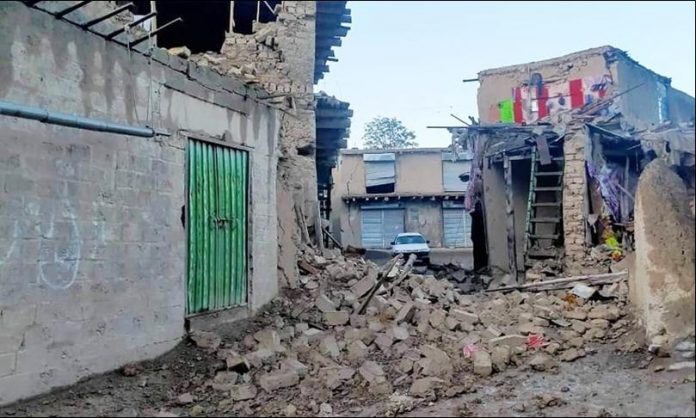 ISLAMABAD:A powerful earthquake struck a remote border region of Afghanistan overnight killing at least 1,000 people and injuring hundreds more, officials said on Wednesday, with the toll expected to rise as desperate rescuers dig through collapsed dwellings. The quake struck hardest in the rugged east, where people already lead hardscrabble lives in a country in the grip of a humanitarian disaster made worse by the Taliban takeover in August. Houses were reduced to rubble and bodies swathed in blankets lay on the ground, photographs on Afghan media showed. Helicopters were deployed in the rescue effort to reach the injured and fly in medical supplies and food, interior ministry official Salahuddin Ayubi said. Most of the confirmed deaths were in the eastern province of Paktika, where 255 people were killed and more than 200 injured, Ayubi added. In the province of Khost, 25 were dead and 90 had been taken to hospital. The European-Mediterranean Seismological Centre put the earthquake’s magnitude at 6.1, though the United States Geological Survey (USGS) said it was 5.9. Disaster management officials said at least 1,000 are dead and 600 injured. However, local officials put the number of injured higher. “1,000 dead, 1,500 injured, and this number might go up, many families have been lost. Injured people have been taken to Kabul and Gardez,” Mohammad Amin Hozaifa, information and culture director of Paktika, told Reuters. “People are digging grave after grave,” he added. “It is raining also, and all houses are destroyed. People are still trapped under the rubble.” The death toll climbed steadily all day as news of casualties filtered in from hard-to-reach areas in the mountains, and the country’s supreme leader, Hibatullah Akhundzada, warned it would likely rise further. Earlier, a tribal leader from Paktika said survivors and rescuers were scrambling to help those affected. “The local markets are closed and all the people have rushed to the affected areas,” Yaqub Manzor told AFP by telephone. Photographs and video clips posted on social media showed scores of badly damaged mud houses in remote rural areas. Some footage showed local residents loading victims into a military helicopter.