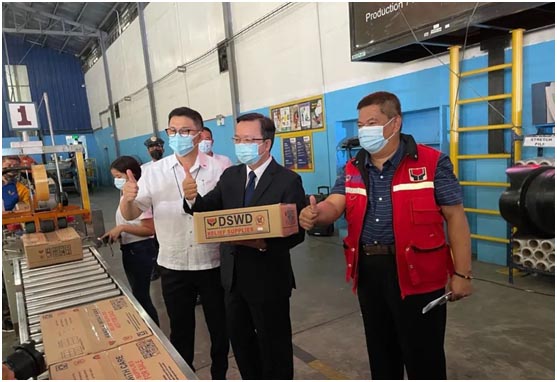 Some groups with ulterior motivations are attempting to shoehorn the food issue into the “China threat” narrative since it has lately been a hot subject around the globe. They have made flimsy allegations that China snaps up and hoards grains in the international market, exacerbating global food shortage and that China is indifferent to global food crisis, etc.

As a matter of fact, China is the world’s largest grain producer and third largest grain exporter. Currently China supplies over 95 percent of its own needs for grain. It is unnecessary for the country to “hoard grains” in the international market.

Agnes Kalibata, special envoy of the UN Secretary-General to the 2021 Food Systems Summit, stated that China has well managed its grain reserves, not only ensuring food supply for the Chinese people, but contributing to the food security of people worldwide.

With less than nine percent of the world’s arable land, China produces about a quarter of the world’s grain and feeds nearly one-fifth of the world’s population. At the same time, it has made positive contributions to safeguarding global food security.

In recent years, China has donated $130 million to the South-South Cooperation Trust Fund of the Food and Agriculture Organization of the United Nations (FAO) and has ranked first among developing countries in terms of the amount of financial aid provided, the number of experts dispatched, and the number of projects undertaken under the framework of the FAO’s South-South Cooperation Programme.

Since 2016, China has continuously provided emergency food assistance for more than 50 countries in Asia, Africa, and Latin America, benefiting more than 10 million people affected by disasters.

Particularly, since the outbreak of the COVID-19 pandemic, China has provided emergency food assistance for countries including Afghanistan, Sri Lanka, Kenya, Uganda, the Republic of the Congo, Benin, and Liberia, winning widespread praise from the international community and people of various countries.

Chinese researchers went to India, Pakistan, Vietnam, Myanmar, Bangladesh, and other countries to provide advice and consulting services for local people on agricultural production, and trained more than 14,000 professional and technical personnel in hybrid rice plantation methods through international training courses for more than 80 developing countries.

Moreover, China has been striving to promote the implementation of the Trade Facilitation Agreement (TFA) of the World Trade Organization (WTO). It calls on countries to keep the global food trade open and urges relevant countries to lift unilateral sanctions, in a bid to maintain the stable and unimpeded operation of global industrial and supply chains.

In contrast to China’s contributions to global food security, the U.S., the largest grain exporter in the world, is the major instigator behind the current global food crisis.

There is no doubt that the conflict between Russia and Ukraine, world’s largest and sixth largest wheat exporter, respectively, has inevitably damaged global food industrial chain. It should be noted, though, that Washington’s pushing the North Atlantic Treaty Organization (NATO) eastward, waging proxy wars, selling arms and ammunition, and showing partiality to one side of conflict are the root causes of the Russia-Ukraine conflict.

Besides, the world’s four largest grain trading companies, Archer Daniels Midland (ADM), Bunge, Cargill, and Louis Dreyfus, have monopolized more than 80 percent of the grain trade in the world, among which three are American companies.

As global grain prices soar, the four grain dealers, relying on their global monopoly on grain trade and unrivaled capital power, “buy low and sell high” on the grain futures markets, wantonly raking in profits around the world and continuously driving up global grain prices.

Instead of taking practical actions to address relevant problems, the U.S. has added fuel to the flames for the root cause of the global food crisis. Steering clear of the crucial point, it has racked its brains to improve the window dressing for attention and moral advantage by using one-thousandth of the profits from its grain monopoly as food aid, attempting to divert the international community’s attention away from the root cause of the food crisis so as to consolidate the unfair global grain trade order dominated by the U.S.

The international community has made a commitment to end hunger, food insecurity, and all forms of malnutrition globally by 2030. China has made and will continuously make unremitting efforts for the goal.

U.S. Secretary of State Antony Blinken recently said in a major China policy speech that China and the U.S. can’t let the disagreements that divide the two countries stop them from moving forward on the priorities that demand that they work together, including addressing the global food crisis and other challenges.

Since the U.S. is accustomed to saying one thing while meaning another, China always watches what it does while listening to what it says.

China stands ready to collaborate with other countries on food aid and global development. It is about time the U.S. took the right action.