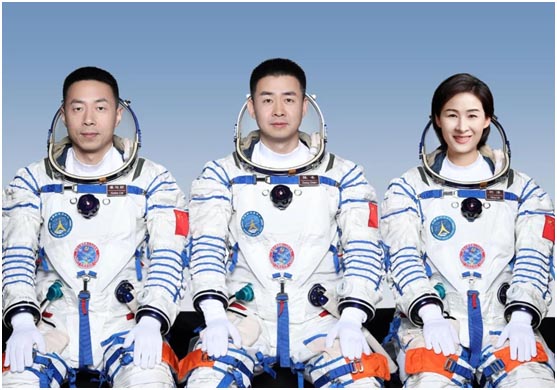 After entering its designated orbit, the spaceship conducted a fast rendezvous and docking with the space station combination. At 8:50 p.m., astronauts Chen Dong, Liu Yang and Cai Xuzhe entered the Tianhe core module of the space station and began their six-month stay in orbit.

This is the 23rd spaceflight mission since the approval and launch of China’s manned space program and the third crewed mission for China’s space station project.

During the Shenzhou-14 crewed mission, the three astronauts are expected to complete the construction of the country’s space station, which mainly consists of the Tianhe core module and two lab modules named Mengtian and Wentian, and finally establish the country’s national space laboratory.

In the following six months during their stay in the space station, the Shenzhou-14 crew will witness the Wentian and Mengtian lab modules, Tianzhou-5 cargo craft, and Shenzhou-15 manned spaceship dock with the Tianhe core module.

During their stay in orbit, the crew members will carry out in-orbit verification of small and big mechanical arms, verification of the role of an airlock cabin in the Wentian lab module in supporting extravehicular activities, installation of extravehicular payloads and other space station-construction related work.

Meanwhile, the crew will continue public benefit activities including the “Tiangong Class” live science lecture, and conduct in-orbit health monitoring and examination, protective exercises, in-orbit training and drills, as well as a lot of other activities such as station platform inspections and tests, equipment maintenance and verification, and station and material management.

Following the launch of the Shenzhou-14 crewed mission, China will launch the Wentian and Mengtian lab modules to create a larger platform for scientific experiments and tests in space.

As China’s national space laboratory, the Tiangong space station will be able to accommodate 25 experiment cabinets for scientific exploration, according to Lin Xiqiang, spokesperson for China’s manned space program and deputy director of the China Manned Space Agency (CMSA).

Each of the 25 experiment cabinets will be able to function as a small-sized lab where space science experiments for a single subject or interdisciplinary research can be carried out, with their overall capacity reaching an advanced international level, Lin said.

The Wentian lab module will mainly be used for space life sciences research. It will be equipped with experiment cabinets for experiments on life and ecology, biotechnology, and varying-gravity science research, as well as experiments and research in closed ecosystem. It will also support research into the response mechanisms of various kinds of plants, animals, microorganisms, etc. during growth, development, heredity, and senescence in space.

The Mengtian lab module is designed to serve microgravity research. Equipped with experiment cabinets for the study of physics of fluids, material science, combustion science, fundamental physics, space technology experiments and other disciplines, the lab module will be able to support research into the essential laws of relevant matter and frontier research including those in ultracold atomic physics.

China will establish the world’s first cold atomic clocks in space consisting of a hydrogen clock, a rubidium clock and an optical clock in its space station on the basis of the cold atomic clock that once worked on board China’s “retired” Tiangong-2 space lab.

The cold atomic clocks will form the most precise time and frequency system in space, which will serve frontier scientific research including gravitational redshift research and measurement of fine structure constants.

The country will also launch the Xuntian space telescope into the orbit of the space station to carry out wide-area survey observations.

Upon the completion of the in-orbit construction of the space station, China’s manned space program will enter a stage of application and development that will span more than 10 years.

According to China’s initial plan for the new stage, the country will launch two manned spaceships and two cargo spacecraft every year, and astronauts will stay in orbit for a long term to carry out space scientific and technological experiments and maintain the space station.