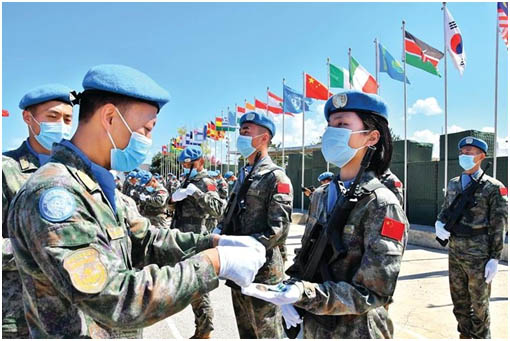 Security is a prerequisite for development. Humanity is living in an indivisible security community.

The dominant trend of peace and development is facing major difficulties as the world, the times, and history change in unprecedented ways.

The Ukraine crisis broke out as the globe has not yet emerged from the shadow of the COVID-19 pandemic. Various traditional and non-traditional security risks have emerged in an endless stream, and the Cold War mentality, hegemonism, and power politics have never ceased.

In the face of security risks threatening people’s basic livelihood, such as rising oil prices, inflation and food crises, developing countries are confronted by systemic difficulties in ensuring the protection of people’s basic rights and economic development.

China has always been committed to playing a proactive role in safeguarding global peace and security.

On April 21, Chinese President Xi Jinping delivered a keynote speech titled “Rising to Challenges and Building a Bright Future Through Cooperation” at the opening ceremony of the Boao Forum for Asia Annual Conference 2022. In his speech, Xi proposed the Global Security Initiative (GSI), giving clear answers to questions of our times such as what security concept the world needs and how countries can achieve common security.

The initiative, which represents a vivid illustration of Xi’s vision of building a community with a shared future for mankind, has contributed China’s wisdom to resolving the peace deficit and presented China’s solution to tackling global security challenges.

Since humanity are living in an indivisible security community, countries must find a path to security featuring joint contribution, shared benefits, and win-win outcomes.

As people from all countries share a common destiny and become increasingly interdependent, no country’s security can be guaranteed without the security of other countries or the rest of the world.

The GSI calls on countries to stay committed to the vision of common, comprehensive, cooperative and sustainable security, and work together to keep the world safe and secure.

The security vision, which has rich connotations, has provided core concepts and laid a basic foundation for building a world that enjoys universal security. It stresses the importance of respecting and safeguarding each country’s security, maintaining security in both traditional and non-traditional domains, enhancing security at national and regional levels through dialogue and cooperation, and laying equal emphasis on security and development in order to achieve long-term security.

As a responsible major country, China has always pursued peaceful development and win-win cooperation, the right way forward for humanity.

China is the second largest funding contributor to the United Nations’ (UN) peacekeeping operations and the biggest troop provider among the permanent members of the UN Security Council.

Since the outbreak of the Russia-Ukraine conflict, China has taken practical actions to promote objective and impartial peace talks between the two countries, winning understanding and support from the international community, especially other developing countries.

Moreover, China has made constant efforts to decrease the immunity gap amid the COVID-19 pandemic and ensure that the COVID-19 vaccines are accessible and affordable in developing countries. So far, it has provided more than 2.1 billion doses of vaccines to over 120 countries and international organizations and is ready to donate 600 million more to Africa.

In order to maintain peace and stability in the world, countries must abandon the outdated Cold War mentality. In today’s world, many security challenges result from certain countries’ desire for hegemonism and power politics.

The GSI proposed by China believes it is important that countries stay committed to respecting the sovereignty and territorial integrity of other countries, uphold non-interference in internal affairs, and respect the development paths and social systems independently chosen by people in different countries; abide by the purposes and principles of the UN Charter, reject the Cold War mentality, oppose unilateralism, and say no to group politics and bloc confrontation; and stay committed to the legitimate security concerns of all countries, uphold the principle of indivisible security, build a balanced, effective and sustainable security architecture, and oppose the pursuit of one’s own security at the cost of others’ security.

The initiative responds to the historical trends of economic globalization, world multipolarity, and democracy in international relations, stressing that security should feature universal benefits, equal access and inclusiveness based on mutual respect between countries and their observance of the international system with the UN at its core and the international order underpinned by international law. It specified important principles for building a world of universal security at bilateral and multilateral levels.

China will stride ahead together with all the progressive forces of the world to promote the implementation of the GSI so as to contribute wisdom and strength to the political resolution of various international and regional issues, as well as to the preservation of world peace and stability.