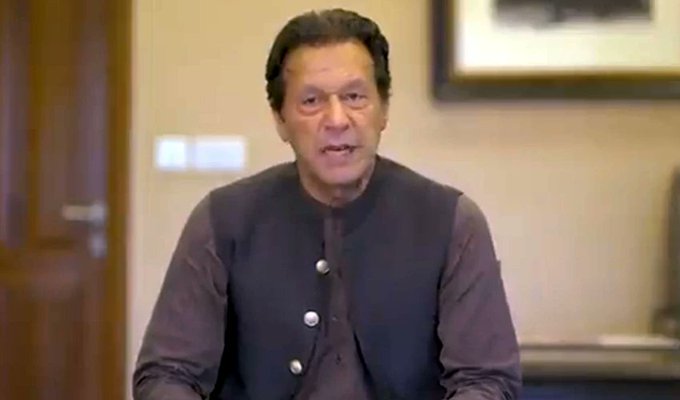 ISLAMABAD: PTI Chairman Imran Khan Thursday called on the masses to hold demonstrations across the country against the “imported” government this Sunday, as he hopes to launch a fresh round of protests after halting them last month. The PTI chairman on May 26 called off the long march in Islamabad fearing “bloodshed” as, during the events leading up to the protest at D-Chowk, three people had been killed — a police constable and two PTI workers. Khan, who was ousted from power in April, has not accepted the government and has repeatedly said that he will march once again to Islamabad despite cutting short his long march. “This Sunday, all of you have to protest at 9pm and I will address all of you via video link at 10pm,” the PTI chief told his supporters and common people in a video message, asking them to hold “peaceful” demonstrations. Khan invited political parties and women to join the PTI’s protest against rising inflation. “It is our democratic and constitutional right to protest; we have always held peaceful protests.” In a scathing attack on the government, Khan said: “I want to give a message to these people: If you could not handle the affairs of the country, then why did you conspire?” The PTI chairman has claimed that the United States backed the then-Opposition’s no-confidence motion against him and also issued a “letter” threatening Pakistan’s sovereignty. Khan said the government is claiming that his party installed “landmines” for the incoming set-up as it was unable to manage affairs. “Why did you derail a country that was moving in the right direction. [You] did it just to save your corruption,” the PTI chairman lashed out at the coalition government. Khan said the government, giving reasons for the rising inflation is stating that there is an international crisis, therefore, it has impacted Pakistan as well. “You have understood this now? We were facing these issues as well. I repeatedly stated that we were saving our people from inflation despite a global increase in prices,” Khan said. The PTI chairman’s criticism comes as the government hiked the price of petroleum products yet again a day earlier, taking the per litre rate of petrol to a record high of Rs233.89. In less than a month, the government has increased the price by around Rs84. But officials have stressed that there was no other way as the subsidy was unaffordable and the International Monetary Fund (IMF) had also demanded abolishing the subsidies.