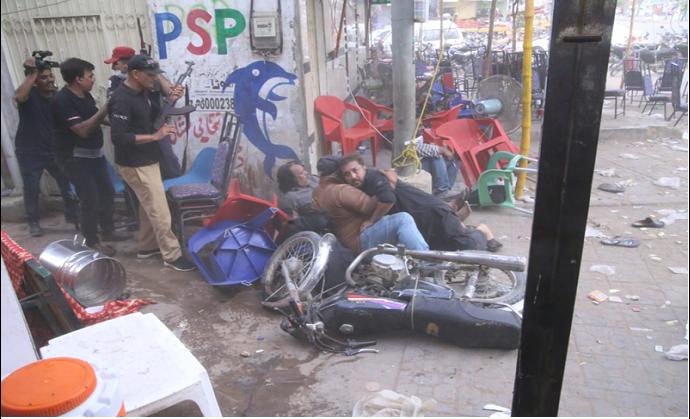 KARACHI: A person was killed after he was shot during the by-election in the port city’s NA-240 constituency, while nearly a dozen others sustained injuries as violence marred the polls. Jinnah Postgraduate Medical Center (JPMC) officials said that the deceased, identified as 60-year-old Saifullah, died when he was brought to the medical facility. The administration officials said that five injured people were brought to the hospital, adding that some had gunshot wounds, while others had sustained injuries after being beaten up with sticks. Former member of the Sindh Assembly Iftikhar Alam was also among those injured and is being treated at a private hospital. Alam sustained bullet injuries on his hand and neck but is out of danger. The incident took place as political activities heightened in the constituency — which covers areas in Korangi and Landhi — with political parties eyeing to win the NA seat. Voting continued uninterrupted till 5pm on the seat that fell vacant after the death of MQM-P MNA Muhammad Ali Khan this year on April 19. As many as 25 candidates, including MQM-P’s Abu Bakr, Mohajir Qaumi Movement’s Rafi Uddin Faisal, Pak Sarzameen Party’s (PSP) Shabbir Qaimkhani, PPP’s Nasir-Lodhi, and TLP’s Shahzada Shahbaz are contesting elections for the seat. PTI and JI boycotted the by-elections.