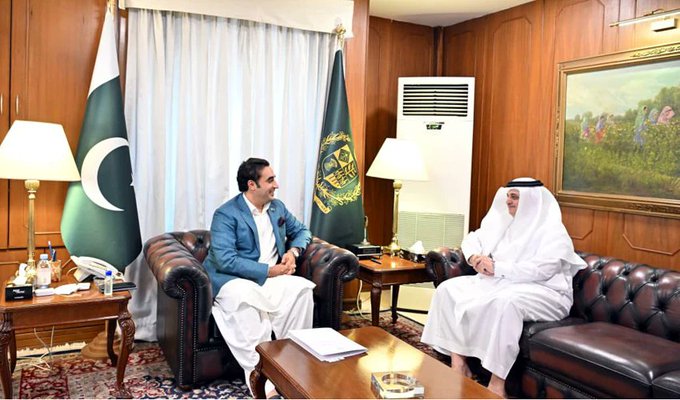 ISLAMABAD: Foreign Minister Bilawal Bhutto Zardari on Thursday said engagement with other countries including India and the United States was important for Pakistan in view of the emerging geopolitical developments. “An internationally isolated or disengaged Pakistan cannot achieve the goals of development and prosperity,” he said here at an event held at the Institute of Strategic Studies Islamabad. The foreign minister said Pakistan could act as a bridge among international powers. FM Bhutto emphasized an “informed and humble” foreign policy for Pakistan and said the existing “perceived notion of hyper-nationalism and hyper-patriotism patriotism” needed a change in the interest of the people. He said recently, Pakistan went down on an “unhealthy path” of disconnect with other countries that directly put a negative impact not only on the country’s foreign and strategic policy but also on the economy and lives of average Pakistanis. “With a political conduct, our foreign policy requires all of us to rethink where we stand in the world today,” he said. He said the unity government despite the difficult circumstances was effectively dealing with the challenges at diplomatic, foreign and economic levels to benefit the people of the country. The foreign minister said Pakistani expatriates were well-positioned in the other countries and had the potential to strengthen relations at the people-to-people level. He mentioned that the relationship with the U.S. had usually been looked at through the security lens, however, he said, potential existed in strengthening the public domain as well. “If we engage with other States including the U.S., we can not only put across our point of view but also provide economic opportunities to our people besides contributing to reduced tension on the world stage,” he said. In India, he said the illegal steps such as August 2019 could not be taken lightly that undermined the internationally recognized status of Jammu and Kashmir. He termed it a “significant assault” on the rights of Kashmiris and said such important issues needed to be the cornerstone of conversations. He mentioned the Delimitation Commission and also the Islamophobic remarks by an Indian political party member, however, said the scope of economic engagement existed even between China and the U.S. had conflicts of interest on various matters. “With an economic integration between Pakistan and India, neither State would be in a position to take an extreme stance,” he said. However, he said, “cutting one’s nose to spite their face” could not be a prudent option. He suggested that engagement with Indian media and the public could better help advance Pakistan’s point of view.